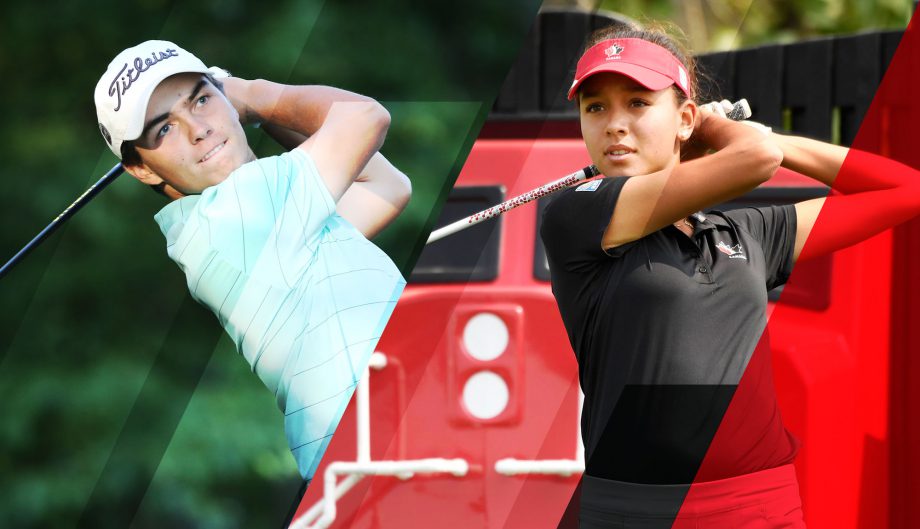 Golf Canada and the Canadian Olympic Committee (COC) are proud to name the two athletes nominated to represent Team Canada in golf at the Youth Olympic Games in Buenos Ares, Argentina from October 6-18, 2018.

Celeste Dao, 17, of Notre-Dame-de-l’Île-Perrot, Que. will represent Canada in the girls’ golf competition while William Duquette, 17, of Laval, Que. will compete in the boys’ event.

The two golf athletes earned their spots on the Canadian Youth Olympic Team based on a collection of 2018 championship results as well as their standing on the Canadian Golf Order of Merit as of August 9th, 2018.

“We are very pleased to announce that Celeste Dao and William Duquette have been selected as the athletes to represent Canadian golf at the 2018 Youth Olympic Games,” said Jeff Thompson, Golf Canada’s Chief Sport Officer. “Both of these talented competitors are eager to succeed in representing Canada on the international stage and have shown tremendous progress in their development.”

The Golf competition at the Buenos Aires 2018 Youth Olympic Games will be held at the Hurlingham Club, from October 9-15. The boys’ and girls’ 54-hole individual competition runs October 9-11 with a 54-hole mixed-gender competition running October 13-15.

A total of 64 golfers are eligible to take part in the golf competition including 32 male and 32 female athletes.

Celeste Dao of Notre-Dame-de-l’Île-Perrot, Que. is in her first year as a member of Golf Canada’s National Development Squad. She won the recent 2018 Canadian Junior Girls Championship as well as the 2018 Mexican Junior Girls Championship. In May, she played her way into the 2018 US Women’s Open by earning medalist honours at a Regional Qualifier. In August, she earned an exemption to compete in her first-ever CP Women’s Open at The Wascana Country Club in Regina. She was also named to one of Canada’s two entries in the 2018 World Junior Girls Championship at Camelot Golf and Country Club in Ottawa where she finished fifth in the individual competition and helped Canada One finish fourth among 19 countries.

The Quebec duo will be accompanied by Matt Wilson, Golf Canada’s Director, Next Generation and Women’s Development Team Coach.

The 2018 Games will mark the second time that the sport of golf is included in the Youth Olympic Games after making its inaugural including in the 2014 Games in Nanjing, China.