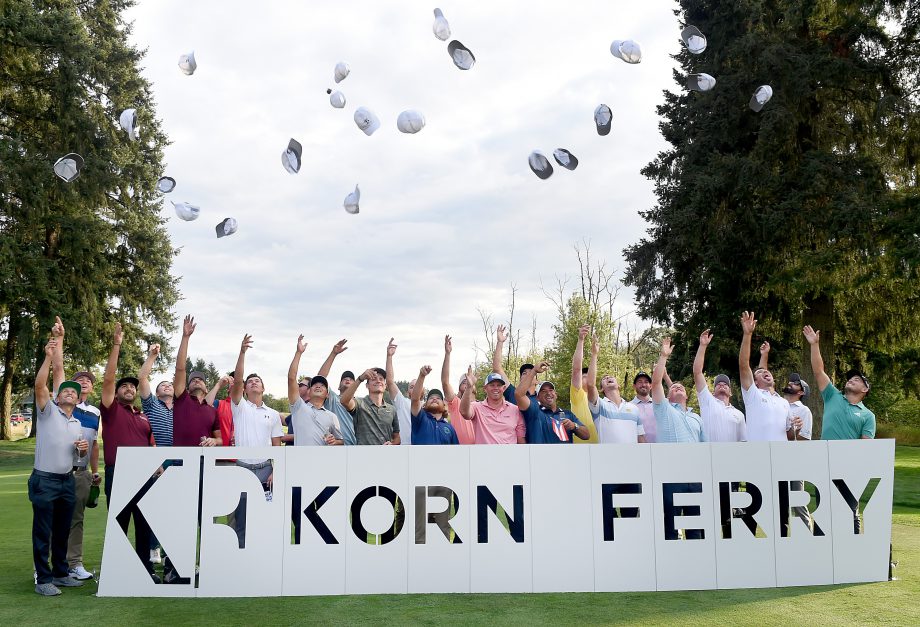 NORTH PLAINS, Ore. — Annually one of the most pressure-packed days in golf, the final round of the WinCo Foods Portland Open presented by KraftHeinz didn’t disappoint with Bo Hoag shooting a final-round 65 to take home his first title. With the win, Hoag earns a spot in The 25, joining 24 other graduates on Sunday evening in securing 2019-20 PGA TOUR membership.

Hoag was one of two players to move into The 25 this week, joining local favourite Scott Harrington who finished in solo-second place. Hoag moved from 31st to seventh in the points standings, while Harrington rose from 38th to 19th.

“Life-changer; You know what’s at stake on a day like today and your mind drifts to it a little bit,” said Hoag, who set the tournament record at 22-under. “You picture what you’re going to be doing after your round….either back here getting a card on this green or packing your car up to go home. I just told myself I wasn’t going to leave here this evening without getting a card on this green. Great day.”

Hoag, a 31-year-old Ohio State University alum, carded a bogey-free round on Sunday to clinch the victory. While as many as five players were tied for the lead on the back nine, Hoag birdied three of his last five to claim the two-stroke win. The former Buckeye has competed on the Korn Ferry Tour each of the past three years and was a member of the Mackenzie Tour – PGA TOUR Canada from 2013-15. The veteran tied for the lead in bogey avoidance, tallying only three over 72 holes. He had a dramatic escape at the par-3 12th when his ball came to rest about a foot outside the pond.

The Columbus, Ohio, native is especially looking forward to advancing to the Korn Ferry Tour Finals with his TOUR card already in hand. The first event, the Nationwide Children’s Hospital Championship, is next week in Columbus. Fellow Ohio State alum Jack Nicklaus called Hoag to congratulate him following the win.

“For me, going to the Memorial Tournament in Columbus [next year] will be special,” said Hoag. “I’ve got some roots there. That’s what got me started thinking this was what I wanted to do. It wasn’t going to be easy, but I was inspired by all that going on out there with my grandpa and dad and watching. Next week will almost be like a victory lap.”

Canadian Michael Gligic (Burlington, Ont.) secured his card in July after his strongest season as a professional, highlighted by a win at the Panama Championship in February.

“It’s been pretty crazy. This might be, like, year 11 now, so it’s been a lot of time on the mini tours, a lot of time practicing with the goal of getting there,” said Gligic. “For it to happen has been pretty special. You dream about making it to the PGA TOUR, or at least it’s always in the back of your mind. It’s golf, so if anyone tells you they haven’t thought about quitting out here, they’re lying to you.”

Harrington, the 54-hole leader, entered the day needing at least a solo-third finish to earn his first PGA TOUR card. A closing birdie at the 18th allowed the hometown hero to secure solo-second and ascension to the TOUR. The win in a familiar place was even more for Harrington with his wife, Jenn, in attendance. Jenn has twice battled Hodgkin’s lymphoma and is now cancer-free. She flew in on Saturday night and watched Harrington earn his card.

“A lot of focus gets put on us, and what we’ve been through, but what she’s been through has been hell,” said Harrington. “It was rough for me, but it pales in comparison to what she’s actually had to go through. To see her so happy on 18, it’s just everything. Family is everything, family trumps golf. To be able to do it for her and have her in attendance makes it that much more meaningful.”

Vincent Whaley, a rookie from Atlanta, earned the 25th and final PGA TOUR card despite missing the weekend. The Georgia Tech alum waited for 48 hours to see if his 761 points would ultimately be enough.

“Honestly, I probably had the worst two days of my life trying to figure it out, doing the math and being a complete psychopath,” said Whaley. “It was a horrible two days, but it worked out…I’m just really happy right now. This is a dream since I started playing golf, to make it onto the PGA TOUR.”

Chris Baker, who also missed the cut this week, finished as the odd man out at 26th in the points standings. Baker, along with the rest of the top 75 players in the standings, will advance to the Korn Ferry Tour Finals where he will attempt to earn one of 25 additional TOUR cards. Two out of the past three players to finish 26th in the standings have gone on to earn their cards in the Finals. Those players (Keith Mitchell and Xander Schauffele) have already combined for five PGA TOUR victories.

China’s Xinjun Zhang, who finished T43 this week, retained the top spot in The 25, though Robby Shelton, No. 2 in the standings, gained ground with a T11 finish. The top points-earner after the Korn Ferry Tour Championship presented by United Leasing & Finance will earn fully exempt status and an exemption into the 2020 PLAYERS Championship.