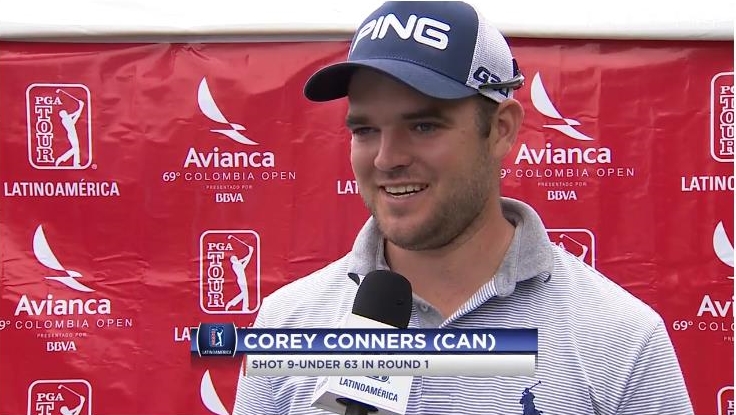 RIONEGRO, Colombia – Team Canada’s Corey Conners had a dream start to the season Thursday morning in Colombia. Starting off No. 10 at 7:20 a.m., the 24-year-old put together a string of five consecutive birdies on his way to a bogey-free 9-under 63. His record-setting performance secured the outright lead at the Avianca Colombia Open presented by BBVA.

Exempt on PGA TOUR Latinoamérica, where he won the Qualifying Tournament played in Sebring, Fla., in January, Conners finished the day enjoying a two-shot lead over the U.S. duo of Brian Richey and Justin Hueber, who carded 65s.

The top 5 includes seven other players who shot 67 to finish in a tie for fourth. That group includes the leading Colombians Álvaro José “Toté” Arizabaleta, who won last Monday’s open qualifier, and Omar Beltrán.

The remaining 67s were posted by Gerardo “Jerry” Ruiz and José de Jesús “Camarón” Rodríguez of Mexico, Wil Bateman of Canada and Case Cochran and Ken Looper of the U.S.

“I’ve been playing good golf for a while, so I was really excited to get the season started. To start with a round like that is fantastic,” said Conners, an up-and-coming Canadian who claimed runner-up honors at the 2014 U.S. Amateur and turned pro after playing the 2015 Masters.

The streak of five birdies he put together to start his day between 10 and 14 was the best birdie string of the day. “Five pretty simple birdies from hitting some nice shots. I kind of kept giving myself chances, could have made a few more putts, but I’m not going to complain at all,” added the young man who got to 9-under with four more birdies on 17, 2, 7 and 8.

With the Club Campestre de Medellin Llano Grande undergoing a major redesign that was completed about 18 months ago, the previous record of 8-under 64 had been set by Juan Sebastián Muñoz when he won the CC de Medellin Open last August and then tied by Álvaro Arizabaleta during last Monday’s open qualifier.

Playing at 6,900 feet above sea level here in Rionegro, a beautiful countryside area in the highlands located 45 minutes above Medellin, was quite amusing for Conners.

“For me the ball is flying a lot further than normal due to the high elevation, so it’s fun to hit some long drives I guess… I’m pretty good at math, so I enjoy converting the yardage into what I would hit back at home in Canada or the U.S. at sea level. I’m just having a lot of fun with it,” added Conners, who studied actuarial mathematics at Kent State University.

A total of 75 players from a 144-man field were able to shoot in red numbers on this opening day, which sets up a low scoring battle to make the 55 and ties cut on Friday.