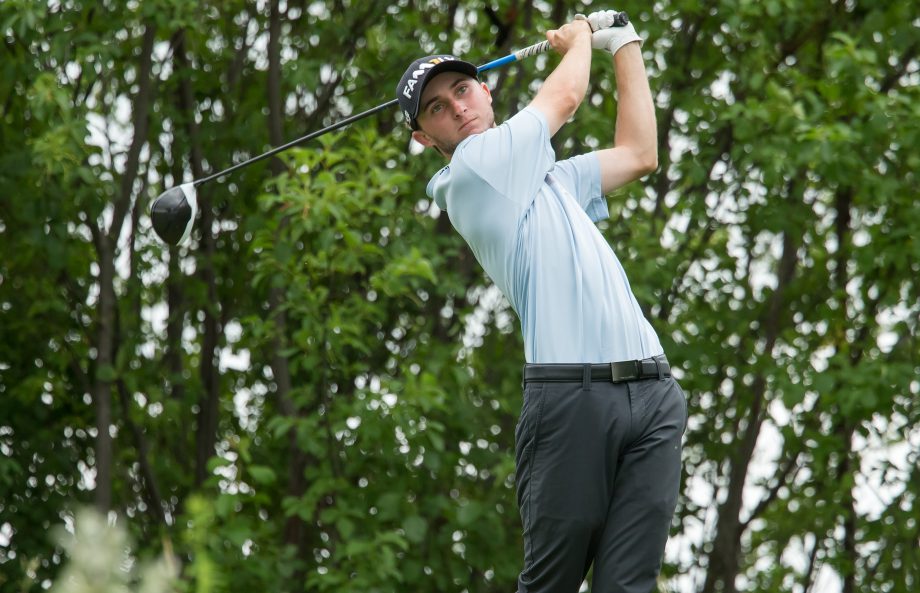 Arbuckle, California’s Ben Geyer shot an 8-under 64 on Thursday at Bell Bay Golf Club to take the first round lead at the Cape Breton Open, the 10th event of the 2016 Mackenzie Tour – PGA TOUR Canada season.

The 24-year old carded two eagles and four birdies on the day, setting the new competitive course record at Bell Bay and leading by a shot over Order of Merit leader and fellow competitor Dan McCarthy through 18 holes.

“I don’t know where it came from. I have been struggling hardcore lately,” admitted Geyer, who has missed four of his last five cuts on the season and ranks 52nd on the Order of Merit. “It’s just nice to get off to a decent start. I had those two eagles in there and I got under par quick. Playing with Dan was nice too, because he had a good round going and I was trying to keep up with him. We had a lot of fun out there.”

For Geyer, things turned around on Wednesday, when a tip from fellow Mackenzie Tour player and travelling companion Talor Gooch led to better shots. The St. Mary’s College graduate hit all but one fairway on day one and was without a bogey.

“It was frustrating because I haven’t been hitting the ball well at all,” said Geyer of his struggles. “It would have been one thing if I knew what I really needed to be working on with my swing, but I haven’t been able to find out what that was. It was one little swing thought that Talor gave me on the range yesterday was real helpful today.”

While Geyer cruised, it was McCarthy who kept pace nearly the whole way. The 31-year old was making his first start in three weeks after missing the National Capital Open to Support Our Troops to rest up for the season’s final three events, a break the three-time Mackenzie Tour winner said was much-needed after missing his last two cuts.

“That little slump that I went through, I definitely learned a lot about how many weeks in a row I can play and what happens when I get tired, because I just got a little sloppy with things I normally do very well with,” said McCarthy, who had played eight straight weeks following the ATB Financial Classic, including a PGA TOUR start at the RBC Canadian Open. “I didn’t have the patience that I started off the year with, so I spent a few weeks back home to kind of re-assess where I was physically and mentally.”

Two shots behind Geyer and one shot behind McCarthy were Lexington, Kentucky’s Kyle Wilshire, as well as current Order of Merit No. 3 Taylor Moore and No. 5 Aaron Wise, who bolstered their chase for The Five with a pair of 6-under 66s.

Team Canada alumnus Austin Connelly opened with a 67 and holds a share of 6th. The dual citizen from Irving, Texas is having a homecoming of sorts, having spent his summers nearby.

“My granddad’s coming up, and a couple of my really close friends are coming up from Church Point. I’ll go to dinner with them tonight, and it’ll be nice to have some friendly support this week.”