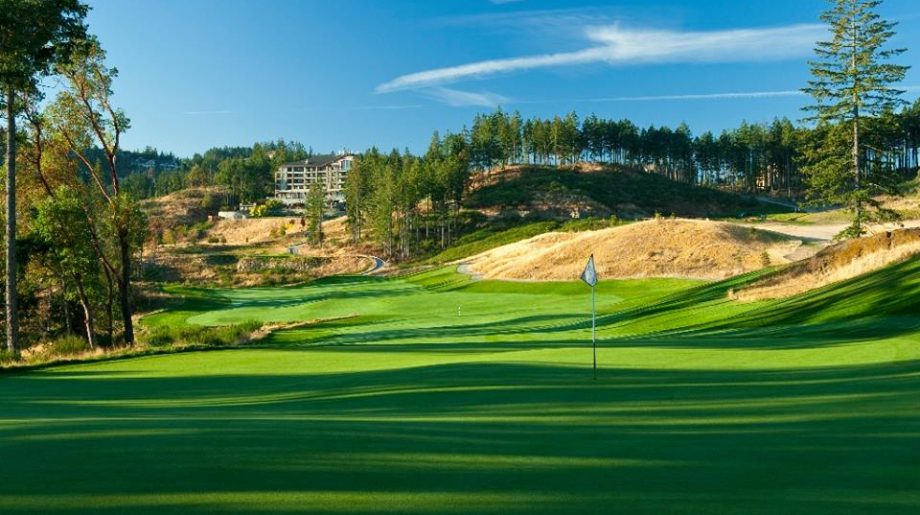 PONTE VEDRA BEACH, Fla. – PGA TOUR Champions and Pacific Links International announced today that the 2016 Pacific Links Championship, originally set to be contested in Tianjin, China, has moved to Bear Mountain Resort in Victoria, B.C.. The tournament dates will remain September 19-25, with the field increasing from 60 players to 81 players, and the purse remaining $2.5 million.

“Bear Mountain Golf Resort is an incredible property, offering not only great golf, but an impressive variety of activities and accommodations,” said Mr. Du, Owner & Chairman of Pacific Links International. “Western Canada is a prime travel destination with attractions that include the internationally prized wine region of the Okanagan Valley, the cosmopolitan coastal city of Vancouver, Vancouver Island and to the east Jasper and Banff National Parks in the Canadian Rockies. We are proud to showcase Bear Mountain and the entire travel destination of spectacular British Columbia by bringing this special event to Victoria.”

Tournament play at the Pacific Links Championship will be held on the Mountain Course at Bear Mountain Resort, which opened for play in 2003.

The Jack & Steve Nicklaus co-design sits just minutes from Victoria’s downtown harbor, and is one of two Nicklaus Design courses at the resort. The Mountain Course sits at the base of Mount Finlayson, and features panoramic city, ocean and mountain views throughout.

“We are delighted that PGA TOUR Champions and Pacific Links have chosen Bear Mountain to host this event, and at such an important time of the year in the Tour’s schedule,” said World Golf Hall of Fame member Jack Nicklaus. “Players and fans will find that this is an incredible backdrop for golf, with gorgeous mountains framing the resort and spectacular vistas from many holes. It also made for a terrific canvas on which Steve and I could create a challenging but memorable resort golf experience. I hope the competitors will enjoy the experience as much as Steve and I did designing it.”

“Bear Mountain is honored to be a part of Pacific Links’ PGA TOUR Champions event,” said Dan Matthews, President and CEO, Ecoasis Developments LLP. “Hosting The Pacific Links Championship at Bear Mountain will enable us to showcase Canada’s only 36 holes of Nicklaus Design golf and go a long way in supporting our goal to demonstrate why we are fast becoming the finest golf resort community in Canada.”

The tournament will give PGA TOUR Champions two events in golf-rich Canada during a four-week stretch, pairing with the Shaw Charity Classic on September 2-4 to provide an exciting late-season run up to the inaugural Charles Schwab Cup Playoffs this fall.

In addition to the Pacific Links Championship, Victoria serves as host of the Bayview Place Island Savings Open presented by Times Colonist, a Mackenzie Tour – PGA TOUR Canada event operated by the Island Open Golf Society for 33 years. The event’s past champions include Steve Stricker (1990), who is set to make his PGA TOUR Champions debut in early 2017, and current PGA TOUR Champions member Mike Grob (2006). Victoria native and Tour member Jim Rutledge has served as the event’s Honorary Chairman since 2014.

“Pacific Links International has been a wonderful partner for PGA TOUR Champions, and we are confident that Bear Mountain Resort will provide a championship-caliber setting for one of our premier events,” said PGA TOUR Champions President Greg McLaughlin. “The passion for golf is strong in British Columbia, and should make for a wonderful tournament week atmosphere for our fans and players.”

From 2012-14, PGA TOUR Champions held the Pacific Links Hawai’i Championship at Kapolei Golf Club on Oahu. Following the 2014 tournament, Pacific Links announced it was moving the 2015 tournament to Tianjin, China, to be played at the company’s flagship course in Asia, The 27 Club. Tragically, in August, a factory explosion in the port area of Tianjin forced the cancellation of the event, with officials making the decision just weeks prior to tournament week out of respect for the hundreds of victims of the tragedy.

Pacific Links and the PGA TOUR remain committed to holding a PGA TOUR Champions tournament in Tianjin, but due to ongoing challenges in the city associated with the explosion, the joint decision was made to move the 2016 event to British Columbia.

Tournament week in Victoria will begin with pro-ams on Wednesday and Thursday, followed by 54 holes of tournament play from Friday through Sunday, with no cut. All three rounds will be broadcast on Golf Channel.