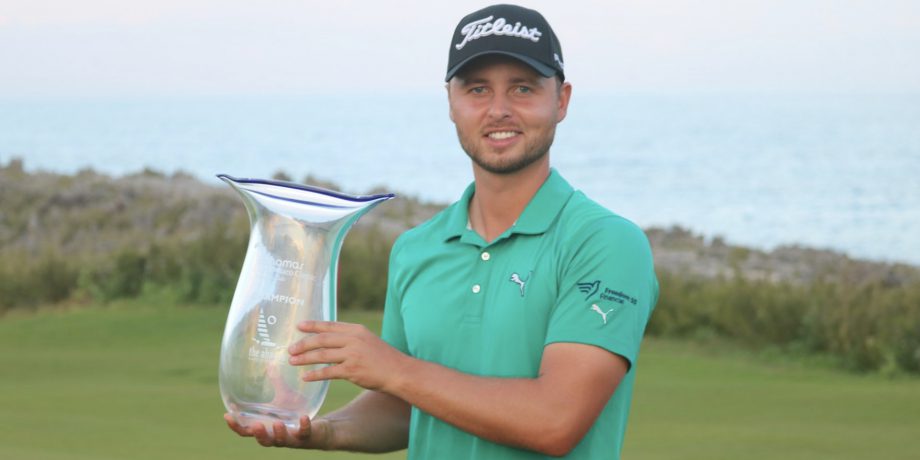 GREAT ABACO, The Bahamas – Canadian Adam Svensson picked up his first Web.com Tour win at The Bahamas Great Abaco Classic at The Abaco Club in his 58th career start. The Surrey, B.C., product carded a final-round, 4-under-par 68. His 17-under-par 271 total was good for a one-stroke victory over rookie phenom Sungjae Im, who missed a 10-footer on the 72nd hole to force overtime.

“It’s a relief,” said Svensson, who couldn’t see Im’s birdie bid at the last. “Your heart is racing and when it’s over it slows down, and you realize what you’ve done. I just so thrilled I got the win and just so happy.”

What a difference a year makes. Svensson missed the cut at both Bahamas events to start the 2017 season and found himself behind the 8-ball all year. He ultimately made it to the Web.com Tour Finals but finished one spot out of securing his PGA TOUR card.

The Team Canada graduate thought about it all offseason but used it as motivation this year.

“It stings a little less,” said Svensson, about the disappointment of not getting his TOUR card last year. “I’ve still got a lot of work to do going forward, but it’s nice.”

After a tie for 13th in The Bahamas Great Exuma Classic and a win in Abaco, Svensson has moved to No. 2 on the Tour money list, firmly inside the top 25.

“Obviously you want to get into the No. 1 spot, which is very difficult,” said Svensson, who collected a $108,000 first-place prize. “You want to try and get inside the top five or as high as you can.”

Down the stretch, Svensson got nervous and it showed on his tee shot at the 16th hole. With driver in hand, the West Palm Beach, Florida resident hooked his drive into the trees on the left. Svensson took a drop, in which his ball plugged in the sand, and hit his third to 33 feet and drained the par-putt to remain in the lead.

“That was wild,” said Svensson. “I told my caddie, ‘I’m not leaving it short. It’s either in or going by.’”

Sungjae Im misses the birdie putt to force a playoff.

Having made bogey at the par-3 17th, Svensson needed a birdie at the last to close out the tournament. He flared his second at the par-5 finishing hole right of the green in a deep swale. Svensson then sailed his chip past the pin just off the green.

Left with a slippery downhill putt, Svensson nestled his putt to within tap-in range to finish at 17-under-par.

“I wasn’t trying to make it,” said Svensson, about his birdie putt on 18. “I knew I had to two-putt and somehow I just nestled it down there.”

The top of the leaderboard had an international flair to it with Svensson winning, Im finishing runner-up and Australian Rhein Gibson ending the week in solo third.

With Svensson’s victory in The Bahamas, 18 players from Canada have won 25 tournaments on the Web.com Tour. Ben Silverman was the last to add to the total with his triumph at the Price Cutter Charity Championship presented by Dr Pepper. Silverman and Corey Conners finished inside the top 50 to earn their PGA TOUR cards and join fellow Web.com Tour alumni Adam Hadwin, Mackenzie Hughes and David Hearn on TOUR.

Svensson, 24, was one of three team members that won the men’s silver medal for Canada at the 2014 World Amateur Team Championship in Japan.

Svensson hopes to be the next star from the Great White North.

“There are so many good Canadians coming up right now,” he said. “Canada has a lot of good players because of the programs they have in place. The Team Canada program is awesome.”

Calgary’s Ryan Yip finished T10 at 11 under par for the tournament.

He talks about gutting it out down the stretch. pic.twitter.com/fDxvG4lFBu