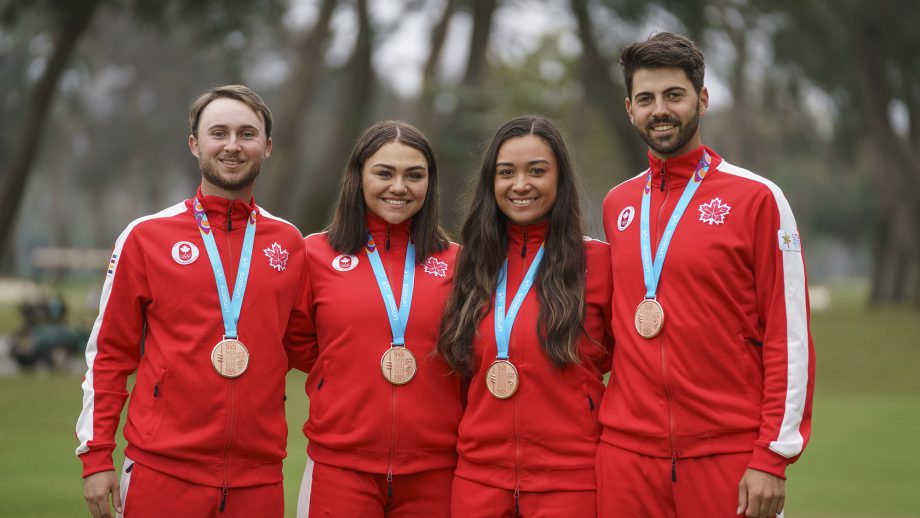 LIMA, Peru – Sunday marked a historic moment in Canadian golf, with Team Canada taking home the bronze medal in the mixed team event—the first-ever medal for Canada at the Pan Am Games.

The mixed team event consists of the lowest female score and the lowest male score of each round combined. Canada closed at 16 under par, good for a collective score of 552 – eight strokes back of the winning American team. Paraguay captured the silver medal with a score of 549.

“I think all four of us grinded out every shot to kind of get to where we are,” said Parsons, who was just one stroke back of silver heading into the 18th hole. “We knew coming down the stretch we had to keep pushing because it wasn’t going to be over until it’s over.”

Scenes from yesterday’s bronze medal winning performance by #TeamCanada at the #Lima2019 Pan Am Games ??

On the men’s side, Austin Connelly of Lake Doucette, N.S., paced the Canadians with 3-under effort in Sunday’s final round, finishing at 11 under overall with sole possession of sixth place. Joey Savoie of La Prairie, Que., carded a 2-over 73, bringing his total to 10 over par. Paraguay’s Fabrizio Zanotti emerged from a playoff to capture the gold medal.

“They are all on this team for a reason,” said coach Tristan Mullally. “They have all been a part of our national team program at some point — my job is to help them prepare for this course with logistics, photographs, advance questions with the greens staff. It’s an amazing golf course for the site – it’s a unique course with some real quality holes.”

2019 marks the second playing of golf at the Pan American Games, and is the largest sporting event ever held in Peru. Golf made its debut at the 2015 Games in Toronto after the sport was added to the 2016 Olympics in Rio.