Canada leads heading into final round of Women’s World Amateur 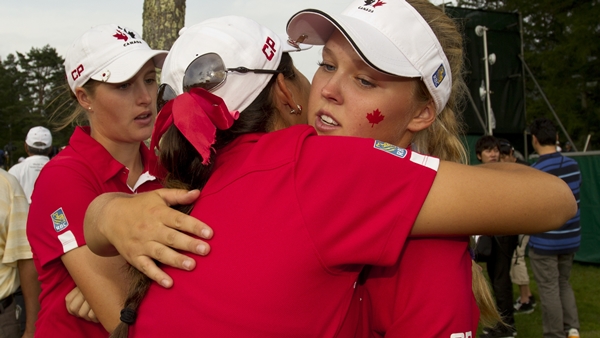 KARUIZAWA, Japan – Canada continues to hold a two-stroke lead over defending champion Korea after Friday’s third round of stroke play at the Women’s World Amateur at Karuizawa 72 Golf East.

Leading the trio once again was 16-year-old Brooke Henderson of Smiths Falls, Ont., who carded a bogey-free, 6-under 66 for the second straight time on the Oshitate course. The Team Canada National Squad member recorded four birdies on the back nine to help her retain the individual lead for the tournament at 15-under par.

The world’s no. 2 ranked female amateur is dialed in and excited to close out the tournament strong in tomorrow’s final.

“I’m really excited for tomorrow and to be in the position that we’re in at such a beautiful golf course in beautiful Japan,” said Henderson. “I’m just really excited and enjoying the moment.”

The second-lowest Canadian score for the day was posted by 22-year-old Orangeville, Ont. native Brittany Marchand. In her first World Amateur appearance, Marchand has delivered consistent results across the board to sit at 6-under par (71-70-69) individually.

“I started out strong, I made a few good putts outside of 20 feet and I was really confident with my putter,” said 5th year N.C. State student. “I was a little shaky on the back with a couple of birdies and a couple of bogeys but overall I think it was a good day.”

Augusta James of Bath, Ont. carded 16 pars en route to an even-par 72, which was discounted as the team’s highest score for the day. James, 21, is playing in her second World Amateur for Canada (2012) and knows what to expect come tomorrow.

“There are some things that I can draw on from two years ago but we’ve got a fresh golf course and it’s a different position that we’re in,” said the reigning Canadian Women’s Amateur champion. “Just trying to embrace that it’s a new day tomorrow and trying to improve on the last three days to help the team.”

Team captain, Liz Hoffman, plans to help the girls remain focused on closing out the tournament after holding the lead for three straight days.

The Canadian trio is set to tee-off tomorrow on the Iriyama course starting at 11:05 a.m. (JST). They will be paired with Korea (-21) and Japan (-17) in their quest to capture the first ever Espirito Santo trophy for Canada.