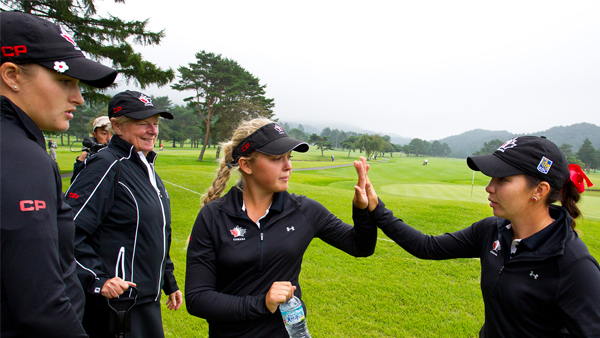 KARUIZAWA, Japan – Canada sits alone atop the leaderboard after Wednesday’s record-setting opening round of 9-under par at Karuizawa 72 Golf East. They hold a two stroke advantage over defending champion Korea in the quest for the Espirito Santo trophy.

Canada’s combined score of 135 is the lowest first-round score in Women’s World Amateur Team Championship history. The record was previously held by USA, who recorded a 136 at the 2010 playing in Argentina.

The Canadian trio was led by teen sensation Brooke Henderson of Smiths Falls, Ont. The 16-year-old Team Canada member fired a bogey-free 6-under 66 to record the day’s lowest score. Henderson is very pleased with her start, but is looking forward to the next three rounds.

“Yeah, it was a great day today, I hit the ball really well and had a lot of opportunities to make birdies and I capitalized on a lot of them,” said Henderson, the world’s no. 2 ranked female amateur. “It’s good to get a run on the first day and I’m really excited to play the next couple days and hopefully continue at the top of the leaderboard.”

Augusta James, the reigning Canadian Women’s Amateur Champion, posted a 3-under 69 – recorded as the team’s second lowest score for the day. The Bath, Ont. native was happy with her ability to stay calm and bounce back after bogeying the 10th and 12th holes.

“I had a bit of a hiccup in the middle with a couple bogeys, but I was happy to come back and finish strong,” said the N.C. State senior. “I felt like I could get to three or more under, so I was happy that I did that.”

Brittany Marchand, also a member of Team Canada’s National Squad, posted a 1-under 71 which was discounted as the team’s highest score for the day. Having an under-par score discounted is always a promising sign for any team moving forward.

“It’s always good to have a throwaway score be under par – it’s awesome that my teammates helped me out today,” said the Orangeville, Ont. native. “I made a lot of up-and-downs to save par and I missed quite a few opportunities for birdies, but I’m hoping those are going to drop the rest of the week.”

Although very pleased with the team’s performance in the opening round, captain Liz Hoffman is determined to keep the team focused on the remaining three rounds.

“I’d say we played the easier of the two courses and we saw some wonderful scores out there so we know we’ve got a lot of work to do,” said Hoffman. “We have three more rounds to play – we’ll take it one shot at a time, one day at a time.”