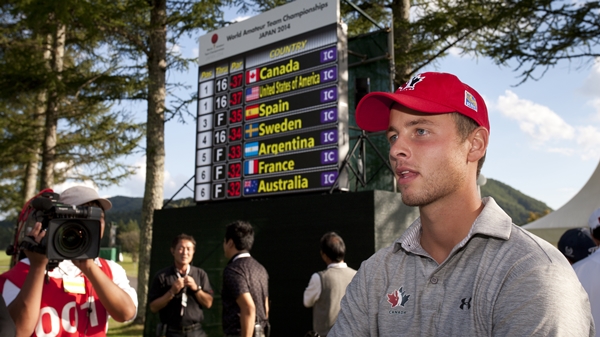 KARUIZAWA, Japan – Team Canada made it interesting down the stretch but could not catch the Americans, falling short by two strokes to finish second at 36-under par at the 2014 men’s World Amateur Team Championship at Karuizawa 72 Golf East.

Canada, which began the day six strokes behind U.S.A., fought back to hold a share of the lead going into the 18th hole, with Canada’s Corey Conners and America’s Bryson Dechambeau left as the final group.

Both players hit their drives in the fairway on the 443-yard, par-4. DeChambeau played first and hit a 50-degree wedge from 110 yards. Conners’ approach settled 35 feet from the hole on the back collar.

“I didn’t know about the scores and I wasn’t sure if his (score) would be counting or not,” Conners said. “There was never a doubt that he was going to make it. It was a pretty nice looking putt.”

“I knew where we stood when I was on the 18th tee box and I knew that I needed a birdie on the last,” said DeChambeau, an All-American at Southern Methodist University, “I striped my drive and hit a wedge in there and nailed that nine-footer. I said that I needed to make birdie and I went out and made birdie”.

“We fought back really hard today,” said team captain, Graham Hill. “We knew that we were going to have to play well to have a chance and we played great and brought it right to the last hole. Obviously, it didn’t work out the way that we wanted but we’re really proud of the guys for the way they played and the way they handled themselves. It’s a good finish for us, disappointing not to win but we’re happy with it.”

The United States, which won the Eisenhower Trophy for the 15th time, took the lead after the third round as DeChampeau, No. 30 in the Men’s World Amateur Golf Ranking™, carded a record-setting low score of 61. Teammate Denny McCarthy, No. 14 in the WAGR™, led the Americans individually, finishing fifth at 19-under par.

Svensson, 20, finished seventh individually to lead the Canadians. The Barry University sophomore, ranked No. 49 in the WAGR™, finished at 17-under par, six strokes back of medalist Jon Rahm of Spain. Rahm, a student at Arizona State University, broke the individual scoring record with a 23-under 263. The previous mark for low individual score for 72 holes was held by golf legend Jack Nicklaus, who shot 269 in 1960.

“We’re pretty disappointed right now but we’re proud,” said Svensson. “The three of us played under par every day so I’m happy about that.”

The World Amateur Team Championship is a biennial international amateur competition conducted by the International Golf Federation (IGF), which comprises 137 national governing bodies in 131 countries. The competition, which is being held for the 26th time, is rotated among three geographic zones: Asia-Pacific, Americas and Europe-Africa.

This year’s event is hosted by the Japan Golf Association. The teams play for the Eisenhower Trophy. The IGF is the international federation for golf for the International Olympic Committee and will conduct the Olympic golf competition in Rio de Janeiro in 2016. In each round, the total of the two lowest scores from each team constitutes the team score for the round. The four-day (72-hole) total is the team’s score for the championship.

The 2016 World Amateur Team Championship will be played in Cancun, Mexico.