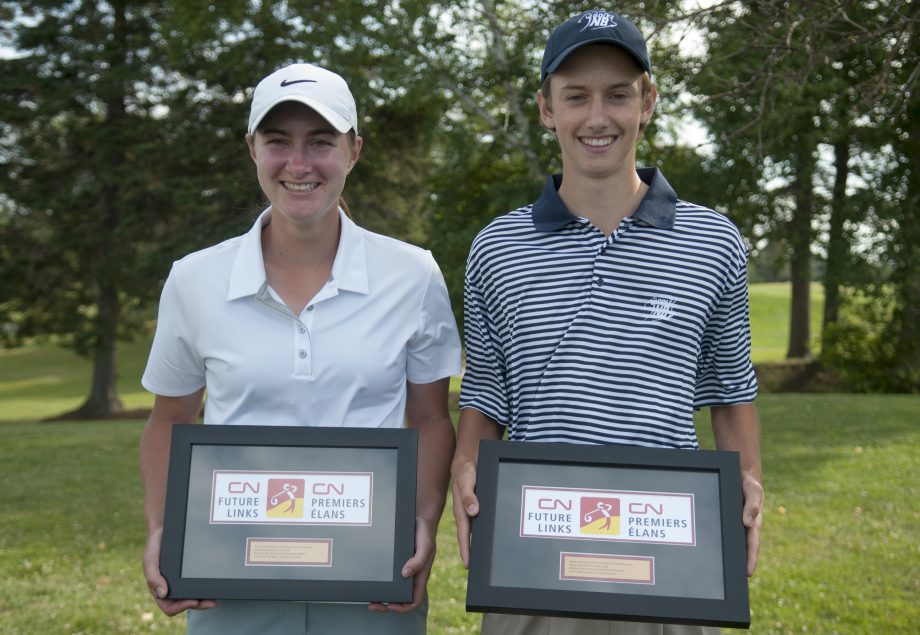 Calvin Ross was locked in a four-way tie for the lead following the first day of competition before breaking through with a three stroke lead after day two. The Fredericton, N.B., product maintained momentum into the final round, posting a 1-under par 71 for a 215 total.

“Today started out well, I got off to a great start with a birdie and from there, I was just playing conservative and trying for a few more birdies. I was really just trying to hit greens and make some pars and continue on,” said Ross. He went on to string together eight pars to follow up his opening birdie for a 1-under on the front nine.

Challenging Ross was Ryan Legault who opened the day with an impressive 6-under front nine before finishing with at 67 for the low round of the tournament. The early push from the Charlottetown, P.E.I., native earned him second place at 218. Finishing in third at 221 with a final round of 74 was five-time Newfoundland and Labrador Junior Boys Champion Blair Bursey of Gander, Nfld.

The 16-year-old Ross has earned an exemption into the 2015 Canadian Junior Boys Championship to gauge his skills against a field of top juniors. The five runner-up finishers in the Junior Boys division at the CN Future Links Atlantic Championship have also earned exemptions to compete in the national championship from August 2-6 at Summerlea Golf & Country Club in Vaudreuil-Dorion, Que.

Allison Chandler opened the third round with a three-stroke lead over Claire Konning of Indian Mountain, N.B., but it was Laura Jones of Moncton, N.B., who would challenge Chandler down the stretch. After hole 13, Jones had climbed within two of the lead, but Chandler maintained her focus to secure the win.

“I was more nervous than I thought I would be,” said Chandler on playing with the lead. “I tried not to think about it and instead tried to think of it as any other round.”

Chandler signed for a 3-over 75, matching her opening round for the lowest score in the Junior Girls division. The Chester, N.S., native concluded the competition with four birdies to finish at 227. The 17-year-old credits her tee shots for the victory. “I drove the ball really well and very consistently.”

Runner-up Laura Jones posted a round of 4-over 76 with three birdies to finish at 232. Third-place finisher Felixe Jacques of St-Gabriel de Valcartier, Que., shot a final round 79.

With the victory, Chandler has earned her place in the 2015 Canadian Junior Girls Championship at Deer Park Golf Course in Yorkton, Sask., from August 3-7. Chandler looks to improve upon a T15 finish at the 2014 edition of the national championship hosted at Thornhill Golf & Country Club in Thornhill, Ont. She has also earned an exemption into a 2016 Canadian Women’s Tour event of her choice.