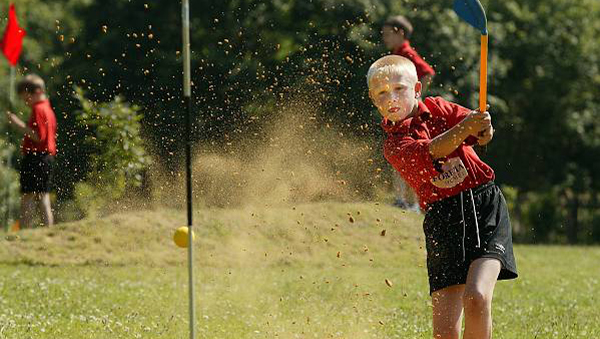 Ian Andrew’s body of work as a golf course architect includes restoring the iconic Highlands Links in Nova Scotia and rebuilding Laval-sur-le-Lac’s Blue course in Quebec with design partner Mike Weir. But amid those grand projects, he has maintained a more modest dream that’s yet to be fulfilled. The Brantford, Ont., designer would like to create a course just for children. He is so passionate about the idea that he’d be willing to reduce or even waive his fee.

Andrew envisages a simple, hazard-free and inexpensive layout that allows young beginners an easy and fun entry into the game. He reasons that kids aged five to 12 will be far more engaged and likely to stick with golf if they start on a playing field scaled to their size and abilities. “If we really want to grow the game, we need stuff like that,” says Andrew, the father of two sons, Cam and James, who are now teenagers. The idea is neither new nor original.

Historic Gullane Golf Club in East Lothian, Scotland, opened its six-hole Children’s Course in 1910, for example. The course policy reads as follows: “Adults are welcome to play although they must be accompanied by a child.”

But such courses are rare, especially in North America. While par-three and executive courses abound, they often include such obstacles as bunkers and forced carries and may not be as kid-friendly as their shortened length might suggest. Andrew would like to change that, if only as an experiment or pilot project. He’d welcome working with a club or municipality, perhaps with the backing of one of Canadian golf’s corporate benefactors, to get a junior track off the ground.

“It needs a bit of a catalyst,” he says, “and I think it can happen.” Andrew has seen first-hand that kidfriendly design can work.

He took his sons in 2010 to Fanshawe Golf Course, the municipal facility in London, Ont., that has a short nine-hole layout in addition to its other, regulation-sized 36 holes. The short course, built in the hollow of an old gravel pit, is not a children’s course per se – it was created more with disabled golfers in mind. But it epitomizes exactly what Andrew imagines. No bunkers, no wildly sloping greens, no water hazards, no chance of losing a ball. Straight holes, each of them minimally maintained.

On their visit to Fanshawe, Andrew started off playing with his sons. Then the boys went off on their own, sometimes playing together, sometimes apart. Andrew estimates they went around the course 32 times in a dizzying afternoon of golf. They usually tired after just nine holes.

“It’s amazing how into the game they can become without all our crap that we sort of hoist on kids and then expect to them to conform to,” says Andrew, arguing that less is more when it comes to golf for kids. “… I didn’t expect the reaction from the kids that we got. It just told me that’s exactly what they need.”

The Fanshawe course opened about 15 years ago. Its holes range from 40 to 110 yards. The green fee? Free. Rob Vincent, Fanshawe’s head professional, says the little track appeals to a wide range of golfers, from juniors to seniors to disabled players in wheelchairs. (The greens were intentionally made firmer to accommodate chairs and the flagsticks are shorter for easier removal.)

The kids who play are typically there with a parent who tags along.

“To have a facility where you can chip and putt and little guys can use their drivers and have no marshals on them and no adults breathing down their necks, I think it’s really unique,” Vincent says.

While Andrew awaits his opportunity – he almost got his chance when he and Weir were speaking with the City of Richmond, B.C., about building a municipal course that had a few holes on the side for kids, but a deal was never reached – others are moving ahead with an alternative that has pretty much the same effect.

The USGA has a Junior Par System, where par is increased to achievable numbers for young golfers. Junior par on a hole could be 6, 7, 8 or even 9. Par for each hole is based on the yardage and the junior golfer’s level of play, usually determined by the junior’s Course Handicap from the forward tees: Beginner with a Course Handicap of 41 or above; Intermediate 25-40; Advanced 24 or below.

The popular program can easily be used by any course and keeps youngsters excited about golf. Many courses across Canada are adding what’s known as “family tees” – tee markers placed in the middle of fairways, well ahead of the forward tees. Junior golf advocates say this solution is more practical than purpose built kids’ courses.

“We don’t have enough money and enough room to build golf courses for kids,” says Brad Ewart, a Coquitlam, B.C. pro who serves as tournament director in British Columbia for the Canadian Junior Golf Association (CJGA). “We already have thousands of existing golf courses that can be for kids.” Ewart says even without using the formal guidelines, clubs can use common sense in deciding where to place a marker or two down on the fairway. “Every PGA [of Canada] member who’s earned his card should know where to put it.”

The cost can be negligible: a small mowed patch marked with something as inexpensive as a painted rock. The only barriers to the initiative that Ewart can see are testosterone-fueled parents who insist their children thrash away from regular tee decks, and golf clubs with no real commitment to juniors. Both Andrew and Ewart agree the bottom line is to put the youngest players in a position where they can succeed. Par should be an attainable score – and that’s not possible for most eight-year-olds, for example, even from the forward tees.

It’s the same rationale as other golf leaders are pitching for adults in the “play it forward” movement, in which recreational players are encouraged to move up a tee deck or two to shoot lower scores, have more fun and speed up the game.

“If we set up a golf course that’s shorter then a young golfer knows he or she can get there (to a par-4 green) in two shots or three shots,” Ewart says. “They’re going to make pars, birdies and bogeys, not eights, nines and 10s.”

That early success makes the game more fun, as Andrew noticed with his sons, who made their first birdies and pars on the Fanshawe short course. “Because they could see success, because it wasn’t that complicated for them,” he says, “it got them really enthused about playing.” And that’s a dream for anyone involved in turning the next generation of golfers into lifetime players.

This article was published for the June 2014 edition of the Golf Canada Magazine, available online here.