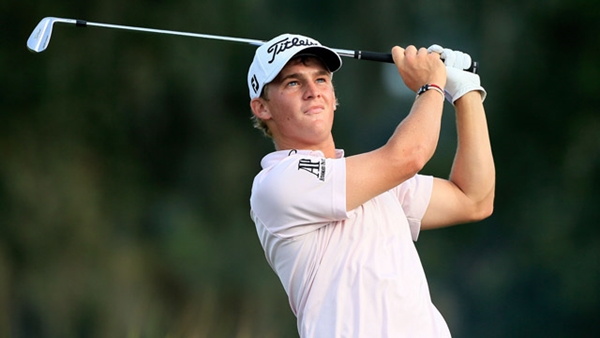 Cauley closed with a bogey-free 7-under 65 at Sycamore Hills for a one-stroke victory over Colt Knost. The 24-year-old former Alabama player won his first professional title.

“I’ve dreamt of winning golf tournaments on tour,” Cauley said. “It’s probably 80-20 between celebration and relief. It was a lot of fun today. Winning is what we aspire to do.”

Sidelined six weeks this summer after dislocating his left shoulder, Cauley birdied five of the first six holes and added birdies on the par-5 12th and 15th. He finished at 20-under 268.

“I knew I had to get off to a quick start and get a few of those (birdies) to get up with those guys and get near the lead,” Cauley said. “I knew a quick start was huge. … The whole day I was watching. I knew with the par 5s on the back that I needed to keep making birdies.”

Cauley was 143rd in the PGA Tour’s FedEx Cup standings, forcing him to play the Web.com Tour Finals for the second straight year. Nos. 126-200 in the FedEx Cup and Nos. 26-75 on the Web.com Tour’s regular-season money list are playing for 25 PGA Tour cards based on earnings in the four-event series, with Cauley earning more than enough Sunday to secure a spot.

He injured his shoulder in July in the John Deere Classic, and missed the cut in the regular-season ending Wyndham Championship in his lone start before the Finals opener.

“After sitting around home for a while, it’s nice to come out and play and play well and get my first win as a pro,” Cauley said. “Today was a lot of fun. I’m looking forward to playing next week.”

Knost, the third-round leader, shot 68, missing a 10-foot birdie try on the final hole. He earned $108,000 to wrap up a tour card after finishing 34th on the Web.com Tour money list.

“I got off to a shaky start,” Knost said. “The conditions were perfect and it was definitely get-able. It’s not like I went out and shot even-par or anything. I’m really proud of the way I played 18. I sucked it up and a really good iron shot in there. I gave myself a chance and I thought I hit a good putt.”

The top 25 players on the Web.com money list earned PGA Tour cards last week. They are competing against each other for PGA Tour priority, with regular-season earnings counting in their totals and the final leader getting a spot in The Players Championship.

Sam Saunders, Arnold Palmer’s grandson, bogeyed the final hole for a 72 to tie for fourth at 14 under with Tom Gillis and Sweden’s David Lingmerth. They each earned $31,333.

Nick Taylor of Abbotsford, B.C. was the lone Canadian to make the cut. He finished tied for 9th at 12-under 276.

Carlos Ortiz, the Mexican player who topped the Web.com money list, missed the cut. He won the regular-season finale in Oregon for his third Web.com victory of the season, making him fully exempt on the PGA Tour. He has earned $515,403 – $175,365 more than second-place Andrew Putnam.

The Chiquita Classic is next week in Davidson, North Carolina, followed by the Nationwide Children’s Hospital Championship in Columbus, Ohio, and the Web.com Tour Championship in Ponte Vedra Beach, Florida.