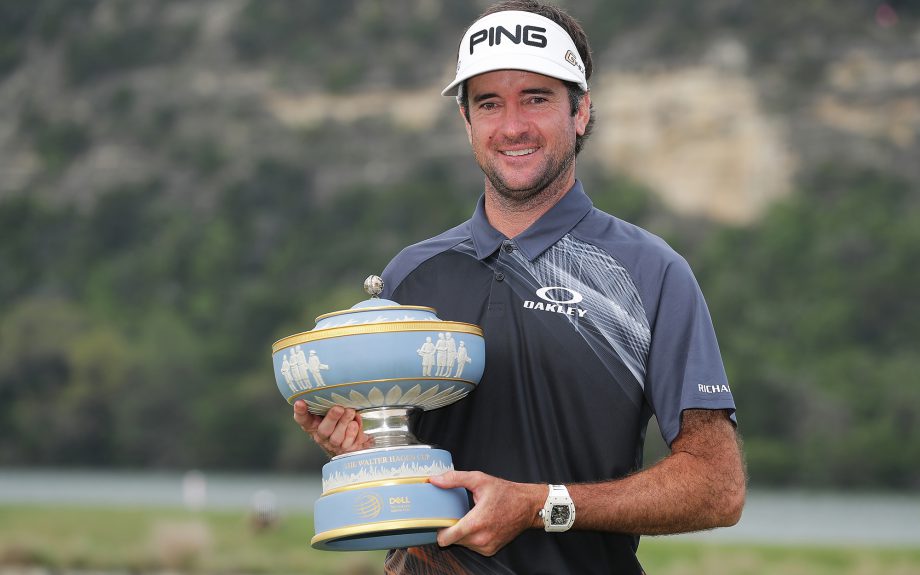 AUSTIN, Texas – Bubba Watson was in high spirits for someone with such low expectations at the Dell Technologies Match Play.

Walking to the sixth tee, already 2 up in his semifinal match against Justin Thomas, he smiled and said, “Just remember, I was beating No. 1 at some point.” Thomas only had to win that match to reach No. 1 in the world, and Watson figured that’s what would happen.

–It was about the only thing he got wrong Sunday.

Watson denied Thomas with a brand of golf that was close to flawless, and then he made the final look as though he were on vacation all along. Watson won his second World GolfChampionship with the biggest blowout since the title match switched to 18 holes in 2011, a 7-and-6 victory over Kevin Kisner.

He sure didn’t expect to play only 28 holes in two matches on the final day at Austin Country Club, lead after every one of them, and pose with the trophy.

“There’s stories all different directions that didn’t go the way I saw it,” he said. “It worked out in my favour. I’m glad I didn’t see it.”

Watson wasn’t as sharp in the final as he was in his 3-and-2 victory over Thomas, and didn’t have to be. If not for missing a 4-foot birdie putt on the sixth hole of the championship match, Watson would have won the first seven holes.

Kisner contributed to that. After escaping in 19 holes against Alex Noren in the semifinals, in which Noren had putts of 10 feet and 7 feet on the last two holes to win, Kisner didn’t put up much of a fight. He made four straight bogeys, and only twice was putting for birdie through 10 holes.

“I don’t know what was going on. It was just pitiful,” Kisner said. “I’ve just got to forget this 12 holes and get back to working on the things that got me here.”

Watson never expected to be here, mainly because this fickle format is not his favourite. He reached the semifinals his first year in 2011 – losing to Martin Kaymer, the PGA champion, for Kaymer to go to No. 1 in the world – and only made it to the weekend once after that.

So he booked a family vacation for Sunday, and then had to change his plans, which was a good problem to have.

Watson won $1.7 million for his 11th career victory on the PGA Tour.

The tougher match was against Thomas, the PGA champion who was poised to replace Dustin Johnson at No. 1 in the world.

Watson went out to a 3-up lead on the front nine, and when Thomas closed to 1 down at the turn with his first birdie putt, Watson won two of the next three holes to regain control. Thomas didn’t make another birdie until the par-5 16th, and by then it was too late. Watson made his birdie from 3 feet for the win.

Thomas said he was too consumed with what was at stake in the semifinals – the No. 1 ranking.

“I haven’t had such a hard time not thinking about something so much. And that really sucked,” Thomas said. “I couldn’t stop thinking about it, to be perfectly honest. And I think you’re constantly getting questions about it with the media. But I need to be mentally stronger than that, and understand that it’s just a match.”

Noren beat Thomas in the consolation match, 5 and 3.

One year after Watson disappeared from among the elite in golf, he has won twice in his last four starts. He was No. 117 in the world when he arrived at Riviera, where he won for the third time in his career. With his 11th victory on the PGA Tour, he now is back up to No. 21.

And the two-time Masters champion added his name to the growing list of contenders at Augusta National.

“I’m looking forward to it, and hopefully I can get this focus and my putter rolling like it is,” Watson said.

Watson played 109 holes over seven matches, going to the 18th hole just once when he halved his match with Julian Suri on Friday.

Through it all, he said he wasn’t committed to only four or five shots. He was hitting high draws, low cuts, all the shots he created as a kid in the Florida Panhandle when he was just a boy with a club and a wild imagination.

He wouldn’t have imagined such an easy time against Kisner in the all-Georgia Bulldogs final that ended with the fabled “dog license” score in match play. A dog license in Britain used to cost seven shillings, six pence (referred to as 7 and 6).

Watson holed a 10-foot birdie on the opening hole, and then Kisner took care of the rest with four straight bogeys. Watson missed his short birdie putt to win the sixth hole, but not to worry. Kisner’s next shot bounced off a spectator’s head and next to a fence, and he had to chip off loose soil across the green for another bogey.

This can happen in match play, and Kisner saw it Saturday in his 8-and-6 victory over Ian Poulter.

Watson, finally, was on the winning end of it.

“It’s crazy to think about it,” Watson said. “I’ve got two World Golf Championships, and two majors. It’s unbelievable to think about that, giving my mom a hug. Six years old, having one golf club for a year, no lessons. I can sit here and make up stories all day, but it’s absolutely remarkable that I’m able to life a trophy like this.”