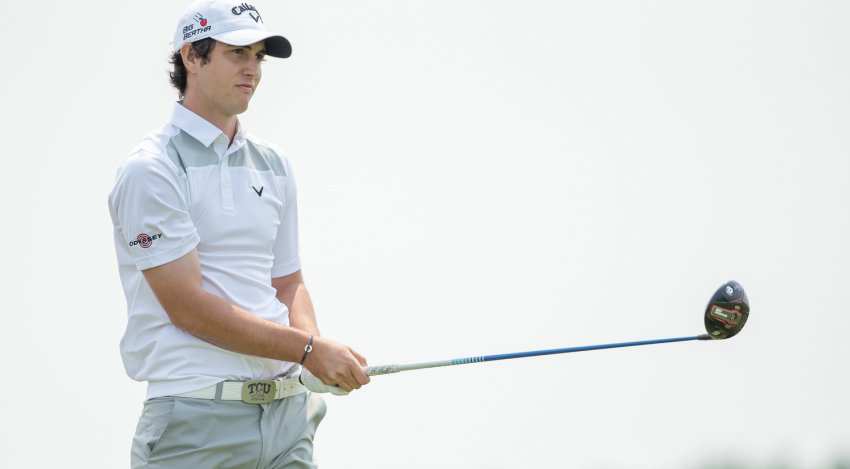 Julien Brun has finished in the top-15 in each of his last three starts.

CALGARY – Jupiter, Florida’s Olin Browne, Jr. and Antibes, France’s Julien Brun carded a pair of 7-under 63s on Thursday at The Links of GlenEagles to share the first round lead at the Mackenzie Tour – PGA TOUR Canada’s ATB Financial Classic.

Browne, the son of three-time PGA TOUR winner Olin Browne, carded seven birdies, an eagle and two bogeys while Brun, a three-time first team All-American at Texas Christian University in his first season as a pro, was bogey-free with seven birdies.

“I got off to a good start. I had my putter working really well and hit some good shots,” said Browne, who birdied the difficult par-4 10th to start the day. “Right out of the box. It was a nice start. I had about 15-feet down the hill and it happened to go in.”

The 27-year old finds himself in Calgary one week before his dad Olin Sr. is set to compete at the Shaw Charity Classic on the Champions Tour, and said he’d love to stick around town if not for the opportunity to spend time at home during next week’s off week with his young family.

“He’s playing next week. He wanted me to caddie for him, but I have a six-month old at home and have to get home to the wife and baby,” said Brown, who admitted it was tempting to stay around in Calgary. “I went fishing in the bow river on Monday and had a great time. It’s a wonderful town and the weather’s perfect.”

Brun, who earned medalist honours at the California Q-School earlier this year, said he was pleased with his 63, the lowest round of his promising young pro career.

“Overall it was a really good round. I played well and I’m satisfied. Today I drove the ball really well and was in the fairway most of the time,” said Brun, who has posted finishes of T11, T8 and T14 in his last three starts.

The 23-year old said he’s becoming more comfortable as the summer goes on in his first season as a pro, and that the transition from team golf to playing for a living has taken some time to adjust to.

“It’s a little different for sure. In team golf, if you shoot even par every round you’re going to help the team and might finish Top-20 or -30. Out here, you don’t do anything. The cuts are super low. You need to play well to win, but the cuts are definitely a big difference,” said Brun.

One shot back of the lead through Thursday’s play was a group of six players at 6-under 64, including 2012 ATB Financial Classic champion Michael Gligic and Alberta native Danny Sahl along with Jeff Rein, Joey Garber, Cameron Peck and Daniel Miernicki.