Brooks holds off chasers to stay in lead at Scottish Open 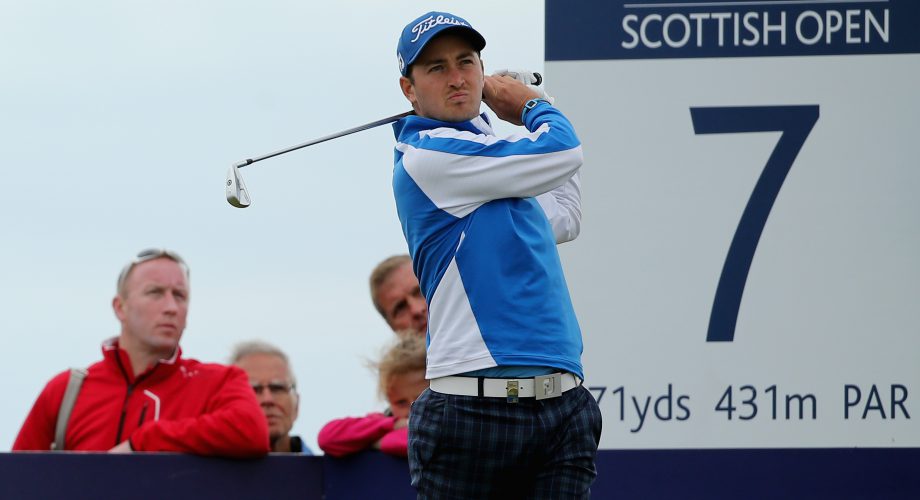 GULLANE, Scotland – Unheralded Daniel Brooks overcame a dreadful start, an injured wrist and the toughest conditions of the week to keep his unlikely lead at the Scottish Open on Saturday, after a windy third round in which Rickie Fowler surged up the leaderboard.

The 528th-ranked Brooks, who surprisingly took a three-shot lead after the second round, recovered from a double bogey on his first hole to shoot a 1-under 69 for a one-stroke advantage on 12-under 198.

Justin Rose, the defending champion, was one of the many players to struggle as winds picked up on the Gullane links off the Firth of Forth, shooting 72 to drop from second to a tie for 18th – six shots off fellow Englishman Brooks. The 12th-ranked Jimmy Walker made three double bogeys and a triple-bogey 8 in his front nine on his way to a 78, which left the American in last place.

A first prize of nearly $850,000 – easily the biggest payday of his career – and a spot at next week’s British Open at St. Andrews is at stake for Brooks in what would be a life-changing win for the 28-year-old Londoner. He had missed the cut at 13 straight tournaments before finishing tied for 20th at the French Open on Sunday.

“I have struggled all year and I need some money to keep my card,” Brooks said. “It’s a big day.”

Brooks won the Madeira Islands Open in May 2014, a tournament restricted to 36 holes and marred by the death of a caddie, but he is in uncharted territory this week given the standard of a field looking to gain links practice ahead of the British Open.

A nervy start saw him slice his opening drive into the thick rough and he could only hack at the ball for his second shot, which moved a foot. In doing so, he jarred his wrist and he said he felt twinges throughout his round.

A six on the first hole briefly dropped him out of the lead behind Jacquelin, and he needed some clutch putts for pars on Nos. 2-4 before settling down.

“I wasn’t feeling the pressure today, which is a nice feeling,” Brooks said.

Jacquelin has a good record at the Scottish Open with a 2nd place in 2009 and a 3rd in 2010, both on the parkland Loch Lomond course. He also showed he is adept over the links in a bogey-free round where he picked up four shots on the front nine, during which he chipped in from off the green on No. 6, then birdies on Nos. 12-13.

Two Frenchman have won this event in recent years – Thomas Levet in 2004 and Gregory Havret in 2007 – and on both occasions Jacquelin was on hand to spray his compatriots with champagne afterward. It’s a French tradition he’d like to see happening again on Sunday, especially given his poor 2015 that has seen go without a top-10 finish.

“I’ve been struggling getting the ball on the fairway or the greens this year,” the 41-year-old Jacquelin said. “Maybe it’s a new Raphael coming back.”

Fowler is the biggest name on the leaderboard after following up a 66 and 68 with another solid round that shows he is in good form ahead of his latest attempt at landing a major. The ninth-ranked American is two shots off the pace.

“One of the goals coming in was to get ready for next week but putting myself in contention has got my juices ready,” Fowler said.

Matt Kuchar of the U.S. is one of three players on 9 under overall after a 67. Phil Mickelson shot a 70 and is nine strokes back.