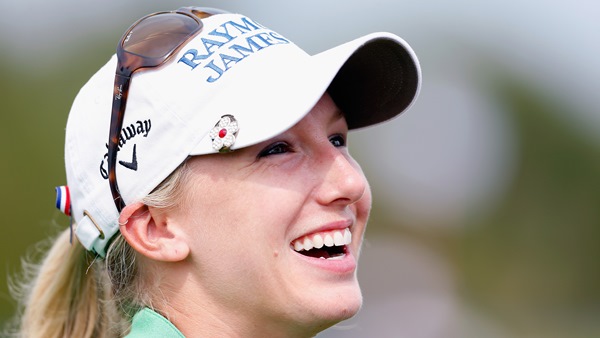 PARADISE ISLAND, Bahamas – Brooke Pancake shot a 6-under 67 on Thursday to take a one-stroke lead in the suspended first round of the Bahamas LPGA Classic.

Play was suspended for the day at 2:47 p.m. and more than inch of rain fell on Atlantis Resort’s Ocean Club course. In May 2013, the inaugural event was reduced to three 12-hole rounds because of flooding.

Playing in calmer morning conditions, Pancake birdied six of her first seven holes in her bogey-free round.

“I luckily got to get out early this morning,” Pancake said. “I gave myself a lot of birdie looks and I really took advantage of those.”

Second-ranked Inbee Park was tied for second with Natalie Gulbis and Brittany Lincicome. Gulbis is making her first start since having hip surgery in November.

“I hit it good,” Gulbis said. “It’s been like any other getting ready for the season. I didn’t play last week. I wasn’t quite ready last week. I’m just happy to be back.”

“It was different out there,” Lincicome said. “Every time I was with a left-to-right wind, I either snap-hooked it way left or blocked it way right. But when the wind was right to left, I crushed it and I did really well.”

Lydia Ko, playing her first event since taking the No. 1 spot in the world ranking, was 1 under through eight holes. The 17-year-old New Zealander tied for second last week in the season-opening event in Florida, to break Tiger Woods’ record as the youngest player to reach No. 1.

“We’ve still got 10 more holes and I know there are birdie opportunities,” Ko said. “The 18th is a par 5, too. We’ve just got to stay patient. Hopefully, I will make a couple more birdies down the stretch.”

Ko played in the rain for the first time since switching from glasses to contact lenses.

Brooke Henderson opened with a 75 in her first LPGA Tour start as a professional. The 17-year-old Smiths Falls, Ont. native won the Monday qualifying tournament to earn a spot in the field. She won a Suncoast Series event last week in Florida in her pro debut.