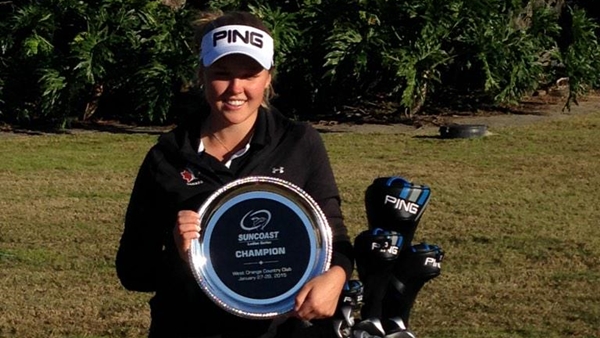 The 17-year-old Team Canada Young Pro Squad Member, who turned pro in December, sank a 10 foot birdie putt on the final hole of the championship for a 69 – the lowest round posted over the course of three days – giving her a single-shot win over her elder sister.

Maria Hjorth of Sweden, a five-time winner on the LPGA Tour, finished third.

Brooke, who previously won three professional titles as an amateur, collected just over $2,000 for the win.

Nicole Vandermade of Brantford, Ont., the only other Canadian in the field, finished with a share of sixth after a final round 73.

Brooke, with sister Brittany on her bag, will now attempt to Monday qualify for the Bahamas LPGA Classic at the Ocean Club. Other Canadians in the field include SooBin Kim of Coquitlam, B.C., Jennifer Kirby of Paris, Ont. and Rebecca Lee-Bentham of Toronto.