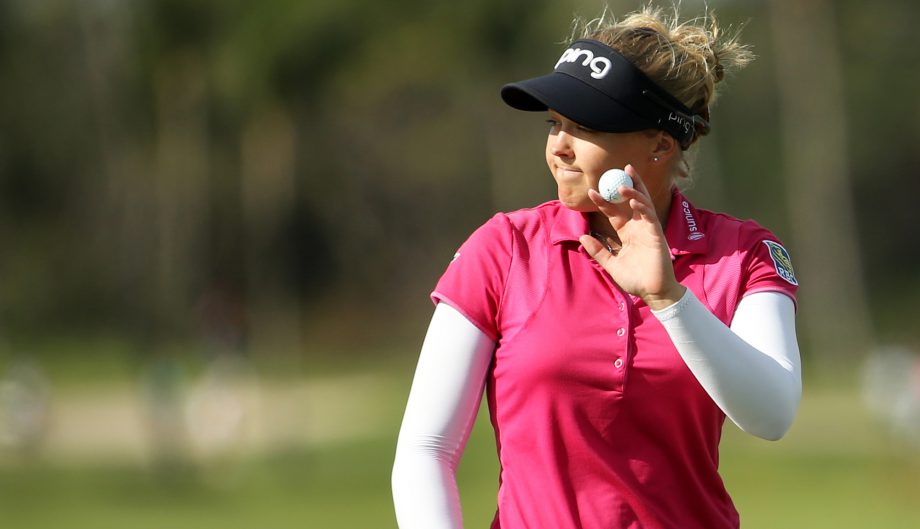 Lincicome shot an 8-under 65 to reach 17-under 129 at Ocean Club Golf Course, and Thompson had a career-best 61 to pull within a stroke.

“The way it’s been going the last two days, the putter has been making everything, which is obviously really fun. If I can keep that up, then it could be good on Sunday,” Lincicome said. “I’m just playing well, and still made everything today. Putter is on point right now and it’s exciting to see.”

Thompson was asked about the possibility of shooting 59.

“I thought about it, but I just wanted to keep on playing my own game and see where it goes,” Thompson said. “I was just pin-seeking the whole day. I was just trying to stay with my routine and have good tempo with my golf swing. That’s just all I’ve been working on.”

Lincicome broke the tournament 36-hole mark, and Thompson shattered the course record of 64 that Lincicome set Thursday. Lincicome had a hole-in-one on the par-3 12th, using a 7-iron from 161 yards.

“When it went in I was like, ‘Do I jump up and down or do I just wave my arms?’ There are so many thoughts that went through my head, but obviously it’s pretty fun,” Lincicome said. “I didn’t feel like I hit the greatest shot, but got away with it and pretty impressive.”

Gerina Piller was third at 14 under after a 65, and Stacy Lewis completed the Solheim Cup quartette at 13 under. Lewis had a 67.

“I’ve really been focusing on trusting my line and trusting my speed, trusting my stroke,” Piller said. “I feel like in my golf game, the long game tee to green I’m a feel player and it seems like my tendency to get on the greens, I kind of lock down and kind of get very mechanical. So really just focusing on really trusting what I have and trusting the line, speed that I choose.”

U.S. Solheim Cup captain Juli Inkster made the cut, following an opening 70 with a 72. She’s starting her 35th season on the LPGA Tour

Second-ranked Ariya Jutanugarn advanced to the weekend on the number with rounds of 75 and 69.

She won five times last season and took the LPGA Tour player of the year award.