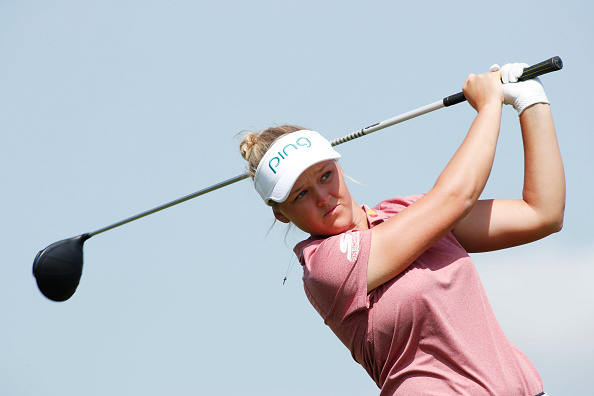 The 20-year-old New Zealander shot an 8-under 64 and grabbed a share of the lead with Lexi Thompson at 15-under 129 with a round left in the Indy Women in Tech Championship. If Ko puts together one more solid round Saturday, she could finally pick up her first win since July 2016.

“I know I’ve still got a whole, full 18 holes tomorrow to go, but I think really the key was that I’ve just kind of enjoyed being in this position and being able to hit some good shots and give myself some good looks at birdie,” Ko said. “When you start doing that, it builds your confidence and you’re not dwelling on, ‘Hey, am I going to hit a good shot or a bad shot.’ I think that’s kind of the mindset that I’ve kind of gotten into the last few months.”

After a summer full of frustration, the 14-time tour winner has shifted gears at Indianapolis Motor Speedway’s golf course.

Ko started the season with four top-10 finishes in seven events, but hasn’t finished higher than 10th since. She even missed the cuts in two of her last three tournaments.

Somehow, amid the intermittent sounds of chirping birds, jet engines, sirens and car horns while playing in the shadows of the racetrack’s grandstands, Ko found some serenity.

While playing partners Anna Nordqvist and Stacy Lewis, the winner last week in Portland, Oregon, struggled, Ko took advantage of the wide fairways and receptive greens and started playing like the world’s No. 1 player_ a title she held for more than 80 consecutive weeks.

Now No. 8 in the world, Ko started on the back nine and opened with consecutive birdies to tie Thompson at 9 under. Ko finally broke the tie with a birdie at No. 15, then took charge with five straight birdies on the front side to reach 16 under. The only glitch came on No. 8 when Ko missed the green to the left and slid her par putt to the right for a bogey.

“It was a little disappointing to finish off with a bogey on my 17th hole, but I felt like I played the toughest hole out there,” she said while Thompson prepared to tee off nearby. “Sometimes you have those mistakes but you need to move on from that. To me, it’s just nice to play some solid golf and put myself in a good position.”

Ko also understood her score might not hold up for the outright lead.

Thompson made sure of it, following her opening 63 with a 66.

The 22-year-old Florida player closed out the front nine with three birdies on the final four holes then adding birdies at Nos. 13 and 14 to tie Ko. But Thompson’s birdie putt at No. 16 missed just to the left of the hole and she wound up scrambling for par on the final two holes when her approaches went through the greens.

“Actually, I didn’t hit one bad golf shot today,” Thompson said. “I feel great about it, I’ll never complain about a 6-under round.”

Brooke Henderson of Smiths Falls, Ont., is six shots back at 9 under after shooting a 68. Augusta James (69) of Bath, Ont., is the only other Canadian to make the cut at 3 under.

Candie Kung made nine birdies and shot a 64 to reach 14 under.

“Luckily, I was able to hit some really close ones and have some 3-footers and 5-footers for birdies and I pretty much made all of them except the last one,” Kung said.

Kerr has more than golf on her mind.

“We live in Scottsdale, Arizona, right now, but my whole family is there (in Florida) and tons of friends and I’m just really, really worried for everybody,” Kerr said as her home state braces for Hurricane Irma.

Sandra Gal was tied with Kung at 14 under, then bogeyed the par-3 15th and hit two drives into the water on the par-4 16th en route to a 10. She finished with a 73 to drop eight strokes behind the leaders.

Amateur Erica Shepherd was 5 under after a 68.

Nordqvist failed to advance, shooting 74-71 to finish at 1 over.