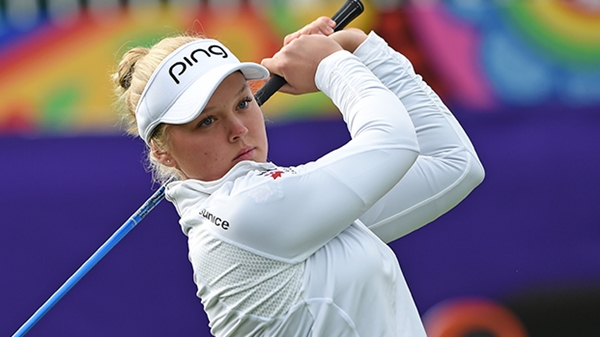 TORONTO — Team Canada Young Pro Squad member Brooke Henderson can add another award to her already extensive trophy case, as she was named the Syl Apps Ontario Athlete of the Year Award recipient by the Ontario Sports Hall of Fame.

The Hall announced their 2015 inductees and award winners April 22. Henderson, a Smiths Falls, Ont., native had a terrific 2014 season as an amateur before turning professional in December.  She will be presented the award at the 20th annual Ontario Sports Hall of Fame Induction Ceremony, which will be held Sept. 24 in Toronto.

The Syl Apps Ontario Athlete of the Year Award was unveiled in 1998 and is named after former Toronto Maple Leafs captain and Olympic pole-vaulter Syl Apps.

As the 2014 winner, Henderson is the first female golfer to win the award and only the second female to take the prize. It is the fourth time an Ontario golfer has earned the honour as Mike Weir was the 1999, 2000 and 2003 recipient of the honour. At just 17-years-old, Henderson is also the youngest winner of the award.

The Syl Apps Ontario Athlete of the Year Award is voted on by Ontario-based sports writers, broadcasters/personalities (with at least 10 years experience covering sports in the province), members of the Ontario Sports Hall of Fame Board of Directors and the Hall’s Advisory Board. Points are awarded on a five, three and one point structure with voters asked to name their top three athletic performers on their ballot.

To be eligible for the Award, athletes must be Ontario-born or Ontario-based and made an outstanding and memorable contribution to Ontario sports during the previous calendar year.