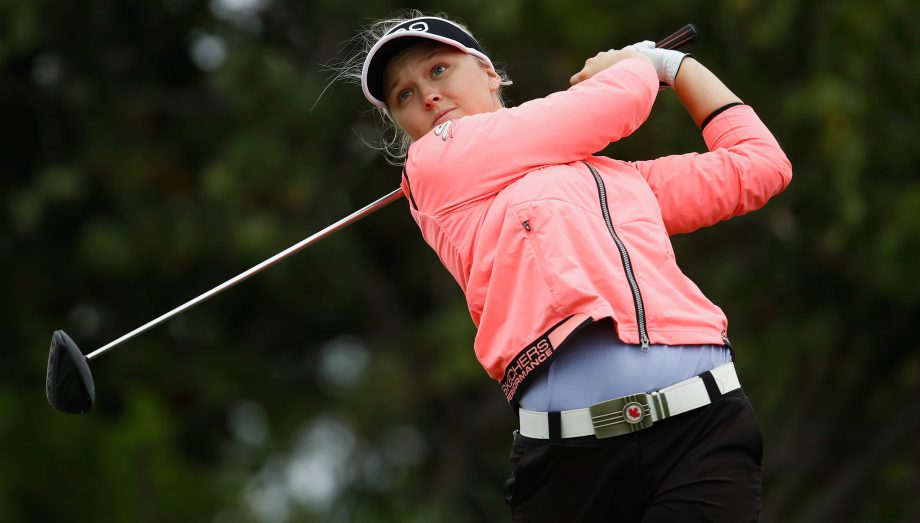 Friday update from the LPGA Tour: Based on the current weather forecast at the 2018 Pure Silk-Bahamas LPGA Classic, the LPGA has decided to take 72 holes off the table and instead focus on finishing 54 holes on Sunday. We should be able to complete the second round on Saturday and the final round on Sunday.

“We did a really good job of hitting balls pin-high, and I don’t know how we did it,” Henderson said about caddie and sister, Brittany. “It’s hard to judge wind sometimes, but I feel like we calculated everything really well.”

The 20-year-old from Smiths Falls, Ont., had four birdies in a seven-hole stretch and closed with three pars on the gusty Ocean Club layout.

“On 8 and 9, my 17th and 18th hole, putting was extremely difficult,” Henderson said. “My hat felt like it was falling off all the time. It was just hard to have good balance and kind of be over the putt for that long and have a good stroke on it.”

“I think by Sunday we will all be pretty good wind players,” Henderson said.

Australia’s Sarah Jane Smith finished with a bogey to drop into a tie for second with Spanish rookie Luna Sobron Galmes.

“I like playing in the struggle, I grew up playing in the wind, and I do enjoy playing difficult shots and stuff like that,” Smith said. “It’s probably better for me (other) people don’t like it.”

“In Majorca, in my town, where I live, the wind is very hard, so it’s like this,” Sobron Galmes said. “I feel the course really is good. You play well, everything goes well.”

Top-ranked Shanshan Feng birdied her last for a 70.

“This is really windy and my ball-striking is not 100 per cent yet,” Feng said.

Lexi Thompson, a playoff loser to Brittany Lincicome last year, opened with a 72.

“If I’m playing well I know I can play well in the wind,” Thompson said. “The key is to hit it solid. The amateurs get out here and they start hitting harder and harder, but that’s not the key. You’ve got to swing a little bit smoother and make sure you get that centre contact. ”

Michelle Wie eagled the par-5 11th in a 73, and playing partners Lincicome and third-ranked So Yeon Ryu followed at 74.

Kim and Ariya Jutanugarn shot 76, and Stacy Lewis had two double bogeys in a 78.

Twelve players were unable to finish the round because of darkness.