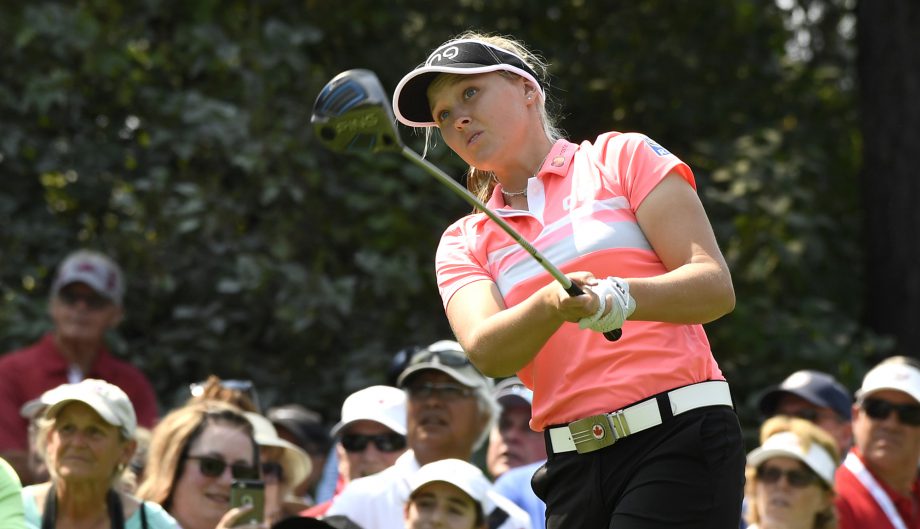 With four LPGA Tour titles, including one major victory under her belt, Smiths Falls, Ont., native Brooke Henderson is recognized for her success across the country and beyond.

While she is grateful for that widespread recognition, the 19-year-old says nothing can top the excitement of competing at home.

Having played a number of junior and amateur golf tournaments in the nation’s capital, Henderson has yet to compete in the Ottawa area as a professional.

Since turning professional in December of 2014, the closest she has competed is in the Waterloo Region for the Manulife LPGA Classic which is about a five hour drive from Ottawa.

However, that will change next week when she tees off at the Ottawa Hunt & Golf Club for the CP Women’s Open.

“I’ve played a few times now in Canada as a professional but never in the Ottawa area, so that’s going to be huge and I feel that the crowds are going to be amazing; I’m really excited for that,” she said during the CP Women’s Open media day in June.

“I think it’s great to have it at the Ottawa Hunt because I recently became a member here.  I would love to play well here and give the crowd something to cheer about.”

Despite never competing at the Ottawa Hunt & Golf Club, Henderson is quick to point out a special memory that came as a spectator many years ago.

“I remember coming here in 2008 and watching the entire field.  I watched Morgan Pressel who I really looked up to and at the end of the fourth hole she walked up and said ‘hey Brooke’ and I was thinking ‘what she knew my name?’ and I was so excited because I met her a month before just in passing and to have her remember my name and that impact it had on me was truly amazing.  And after her round, she handed me her glove and a signed golf ball,” recalled the now 19-year-old Canadian golf star.

“What I learned that day is you have so much of an impact on the younger generation and people of all ages; and so for me this year, I really want to be able to give a lot of time to the media and the fans – and especially, to the young kids to inspire them to play the game,” she added.

Someone else who inspired aspiring young golfers in Canada is four-time LPGA Tour winner, Lorie Kane – and she is quick to acknowledge Henderson’s current influence.

“Brooke has accomplished so much and she’s only 19, so she’s just getting started,” said Kane. “A lot of young kids across the country definitely look up to her success and she’s a great role model for them,” said Kane about Henderson, who won the KPMG Women’s PGA Championship in 2016 to become first Canadian to win a women’s major in 48 years.

“She’s definitely handled her success really well and that says a lot about her as well as the people around her,” added Kane.

Having signed on with CP as an ambassador earlier this year, Henderson has a few nice words in return for the Canadian Golf Hall of Fame member and longtime CP ambassador.

“To be with Lorie, who paved the way for Canadian women’s golf all across the board, it’s amazing to be in her family and her team,” Henderson said.

Joining Kane and Henderson at the CP Women’s Open next week will be the LPGA’s finest including current world No. 1, Ryu So-yeon, three-time champion, Lydia Ko and defending champion, Ariya Jutanugarn – to name just a few.

While the former world No. 2 from Smith Falls, Ont., acknowledges there’s pressure associated with being the hometown favourite at the CP Women’s Open, she also recognizes that pressure is also a privilege.

“Of course there will be pressure, but it can be fun too because you have everyone in your corner cheering for you and every shot means a lot of them, too. So, hopefully, I can perform to the best of my ability and put on a good show and get everybody on my side,” she said.

With only one Canadian – Jocelyne Bourassa in 1973 – capturing the national championship in its 44-year history, Henderson says she places special emphasis on winning the tournament.

“This tournament is like my fifth major on the LPGA TOUR. This is the event that I would love to win the most over my career.  Whether it happens this year or in the future it’s the number one event on my bucket list,” she added.

When asked about her chances of capturing the title this year in her homecoming tournament, Henderson says she is ready and capable.

“Going into any tournament the goal of any player is to win it; and I definitely feel that I have a good chance to win here,” she replied. “It’s just about being able to play my game and also getting a few breaks along the way.”