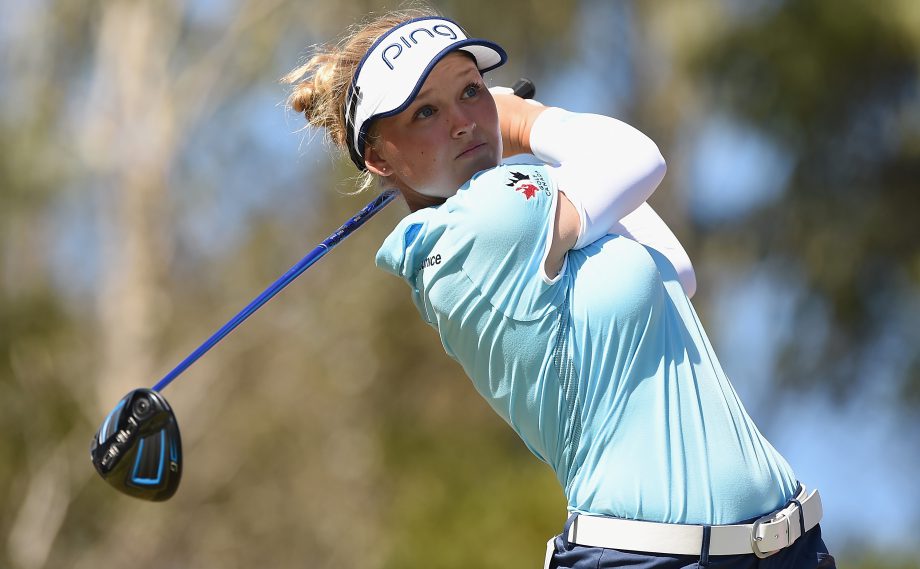 Despite no LPGA Tour event this past week, Brooke Henderson has achieved another milestone in her young career.

The 18-year-old from Smiths Falls, Ont. cracked the top ten in the Rolex Rankings – the weekly tabulation for female professional golfers – for the first time, sitting 10th.

Henderson, who started her year with four top-10 finishes in five events, three on the LPGA Tour and one on the Ladies European Tour, is in Phoenix this week for the JTBC Founders Cup.

The teenage sensation has had a meteoric rise up the Rolex Rankings since her victory last August. She has admitted in past interviews that her goal is to reach no. 1 in the world, but she’ll have to overtake fellow 18-year-old Lydia Ko to do so.

It’ll take Henderson a few more victories before she can eclipse Ko, but recently announced Canadian Golf Hall of Fame inductee Lorie Kane doesn’t feel like it’ll be too long before she finds the winner’s circle again.

“I just spent some time with her in Australia, and there will be another win coming soon, I don’t doubt it,” Kane told reporters during her Hall-of-Fame announcement conference call.

Henderson’s whirlwind world tour has taken her to both Australia and Singapore – “much different than Smiths Falls,” she admits – in early 2016, but she has also been able to take in the perks of a touring professional (and not something every Canadian teenager gets to do).

The Henderson sisters enjoyed the architecture of downtown Singapore, and both held a baby kangaroo and koala bear while down under.

She also managed to play some pretty good golf – finishing tied for ninth and eighth respectively in the two countries. She also visited Ping’s headquarters early last week to receive a solid-gold putter – a token that each Ping-sponsored player gets after a victory – and spent some time in nearby Phoenix with fellow Canadian Alena Sharp, playing some golf together with sister Brittany.

The reigning Canadian Press Female Athlete of the Year is also set to represent Canada at the Olympics this summer, in all likelihood with Sharp as a teammate.

Sharp and Henderson are expected to participate in the closing ceremonies before flying directly to the Canadian Pacific Women’s Open, the first of two back-to-back LPGA events on Canadian soil this summer.

She spent two months as the world’s no.1-ranked amateur before turning professional at the end of 2014.