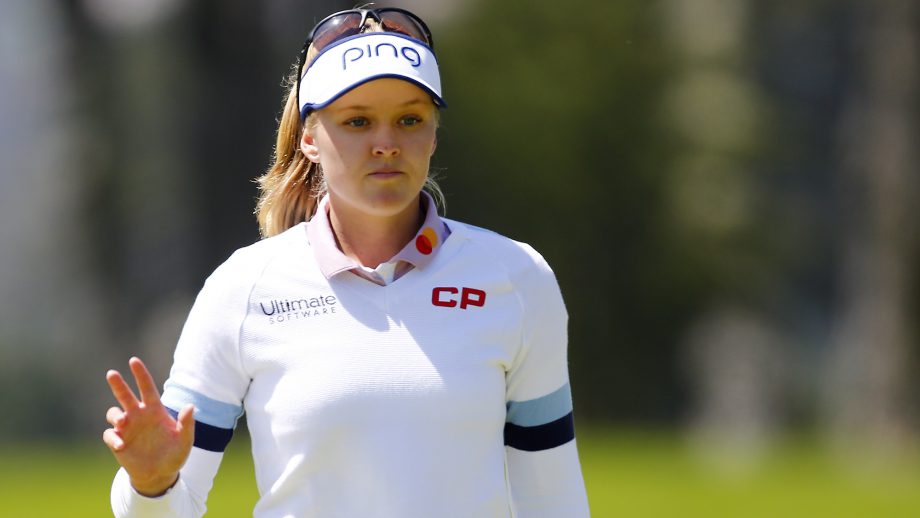 DUNROBIN, Ont. – While Brooke Henderson is enjoying some time off at home, she’s ready for a busy stretch.

The Canadian golf star, who put on a clinic for youngsters at the Kevin Haime Kids to the Course Classic at Eagle Creek Golf Club on Wednesday, will play six weeks in a row starting next week. After another week off, the 21-year-old native of Smiths Falls, Ont., will play four more tournaments in a row.

Henderson also will be in Aurora, Ont., on July 2 for an appearance leading into this year’s CP Women’s Open in August, where she is the defending champion.

Although Henderson has a win this year – her eighth LPGA Tour victory at the Lotte Championship in Hawaii tied her for the all-time wins record by a Canadian – she has missed two cuts, which she admitted was “unlike” her. Earlier this year, Henderson had to drop out of two events due to illness.

Still, she said she’s been pleased with her year.

“Winning is fun,” she said. “It’s fun for me to have these goals, and they’re realistic goals. This is a big stretch and if I can get my game going, I can put myself into contention.”

Henderson and her older sister/caddie Brittany don’t return home too often these days – although their family still lives in Smiths Falls, the siblings spend more time at a home in Naples, Fla. But even when Brooke’s not in the region, her presence is felt.

Haime runs a driving range in Ottawa’s west end and has a junior golf initiative that has given many youngsters free memberships for the past 12 years. He said Henderson’s impact on junior golf in Canada is “immeasurable.”

During the clinic, Henderson told stories from her time on the LPGA Tour and gave some advice to young golfers.

For her own career, Henderson said she’ll be trying to improve her short game over the next few weeks.

While her scoring average ranks fourth on the LPGA Tour, her putting has held her back this year. She’ll be switching putters for next week’s Pure Silk Championship.

“If people can find that love and passion for the game, good things will happen for them.” @BrookeHendersonGolf #WeAreCanadianGolf Celebrate #CanadaGolfDay and go play! ??⛳

Henderson said she enjoys the River Course at Kingsmill Resort in Williamsburg, Va., where she finished fourth in 2018.

“(The course) is lush and tree-lined which I love. I’ve played OK there before, but I feel potentially I could play really well there,” she said. “I always look forward to that week.”

Henderson said she’s also excited to play in the U.S. Women’s Open, the next LPGA major, May 30-June 2 in Charleston, S.C. She competed at the U.S. Women’s Amateur in 2013 at the Country Club of Charleston, the host club for this year’s event, and said that should give her a boost.

Henderson, who withdrew after the first round of last year’s U.S. Women’s Open due to the death of her grandfather, said the tournament is special.

“You get there and the atmosphere is just so different,” she said. “The U.S. Women’s Open is a big one that hopefully I can get before my career is over.”

The victory, Henderson said, inspired her to practise a little more and boosted her energy on the course.

“It’s hard work for sure, but it’s also my dream to be out here,” said Henderson. “When I have a chance to win, it potentially makes it even better ? it brings a smile to my face because as a little girl that’s what I dreamt of, and now I’m living that dream.”