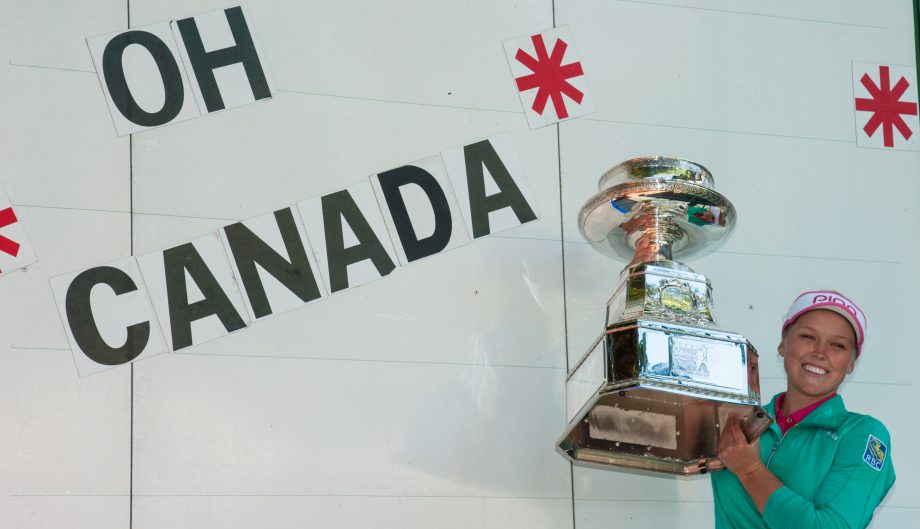 I’ll admit this is a tad presumptuous, but when Brooke Henderson publishes her autobiography, she might well title it, “Faith, Family, Friends and Fairways.” (I love alliteration.)

For proof, you need look no farther than her tweet after winning her fourth LPGA title, the Meijer LPGA Classic on Father’s Day, a couple of weeks back.

“Thanks to my Dad and to God our father for this amazing day!!”

Thanks to my Dad and to God our Father for this amazing day!!Happy Father’s Day!! ☺️☝?️

At 19 and in only her second full year on tour, Henderson will try to defend her title this week at the KPMG Women’s PGA Championship at Olympia Fields Country Club near Chicago.

When she won the 2016 PGA Championship at Sahalee Country Club in Washington, she became the first Canadian woman to win a major since Sandra Post did so in 1968. When she won the Meijer, she tied Lorie Kane’s record of four LPGA victories.

The three are tied together in other ways. They are all sweetness and light on the outside but that masks a fierce competitive nature. Raised in small towns (Post in Oakville, Ont., Kane in Charlottetown, P.E.I., and Henderson in Smiths Falls, Ont.), all three were introduced to golf by their fathers.

And it would be remiss not to mention Jocelyn Bourassa of Shawinigan, Que., who was the LPGA rookie of the year in 1972. The following year, she won our country’s national women’s Open championship, then called La Canadienne and now the Canadian Pacific Women’s Open.

Among the legacies that Henderson is inheriting, Bourassa’s may mean the most in this, Canada’s 150th birthday year, for Bourassa was the last Canadian to win our women’s Open. There will be additional pressure as the tournament takes place Aug. 21-27 at what Henderson now calls her home club, the Ottawa Hunt and Golf Club.

But pressure is something the self-confident Henderson is used to. Rather than flinch, she embraces it.

In a recent conference call, she said she was “really excited for the opportunity” to defend her PGA title and enthused about the support she is receiving.

Along with a focus on her professional goals, she is cognizant of the impact she is having on the game, especially in Canada. Her success, like that of Bourassa, Post and Kane, is inspiring.

“Of course I have personal goals but the impact on the game is really huge for me. I have people of all ages coming up to me asking for a photo with me or an autograph. I really hope I can do so much good for golf.”

Henderson is blessed to have her sister Brittany, also an accomplished golfer, as her caddie. Her mother and her father, who is her coach, travel with them frequently. (It should be noted that Henderson, as a member of Team Canada, learned much under the tutelage of national women’s team coach Tristan Mullally.)

“I am extremely grateful for my family’s support. My sister as my caddie, my dad as coach, and my mom as my No. 1 fan and cheerleader. None of this would have been possible without all the sacrifices from all of them.

“I believe everyone is given a special gift and I hope I can make the most of mine.”

Doubtful that anyone who cares about golf in Canada doesn’t believe that Brooke Henderson isn’t a special gift herself.