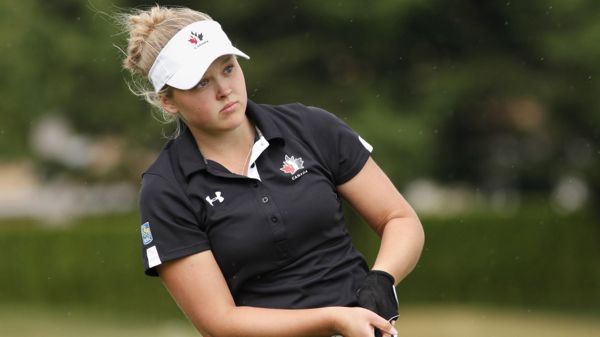 Henderson, a member of Team Canada’s National Squad and Tanguay, a former member of Team Canada, share the lead at 3-under 139 for the tournament. Henderson, who came in to Wednesday with a share of the lead, carded a 1-under 70 in her second round. Tanguay’s 3-under 68 was tied for the best round of the day.

“Everything was really going well,” said Tanguay. “I know the course and my family was here so I was really happy.”

Mariko Yamaguchi-Tumangan of San Jose, California, Maribel Lopez of Columbia and Casey Danielson of Osceola, Wisconsin sit in a tie for third at 1-over 143. Mariko and Lopez both shot a 2-over 73, while Danielson had an even-71 second round.

Vivian Tsui of Markham, Ontario, Simin Feng of Windermere, Florida and Gabriela Lopez of Mexico are in a tie for sixth at 2-over 144. Tsui’s 3-under 68 was tied with Tanguay’s round for best of the day.

The best hole of the day went to Seshia-Lei Telles, of Tualatin, Oregon, who carded a hole-in-one on Beloeil’s 13th hole. Telles currently plays for the Oregon State University Beavers.

“This was the second time I ever hit a hole-in-one,” Telles said. “But to do it in a national championship is just awesome!”

76 players will be moving on to round three after making the cut. The Individual Stroke Play division cut was at 14-over 156 while the Mid-Amateur division and Mid-Master division cuts were at 24-over 166.

In the Mid-Amateur division (25+ years), Christina Proteau of Port Alberni, B.C., who has won the division the past two years, maintains her lead over Helene Chartrand of Pincourt, Que after shooting a 2-over 73 in her second round for a tournament total of 7-over 149. Chartrand, who carded a second round 4-over 75 for a two-day score of 10-over 152, is leading the Mid-Master division (40+ years) by a single stroke over Leanne Richardson of Indian Mountain, N.B.