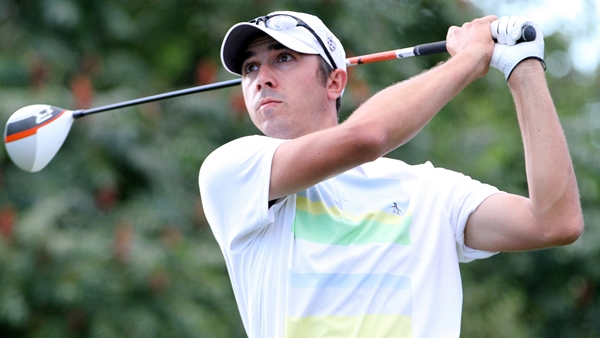 CALGARY – Yakima, Washington’s Brock Mackenzie carded six birdies and a bogey to shoot a 5-under 67 on Saturday at Sirocco Golf Club and build a two-shot lead heading into the final round of the ATB Financial Classic.

The 33-year old was 21-under through 54 holes, the lowest mark of the PGA TOUR Canada era and tied for the second lowest in Tour history. Mackenzie has made just one bogey on the week, offset by 22 birdies to lead by two over Tulsa, Oklahoma’s Stephen Carney and Milford, Iowa’s Brady Schnell, who followed up a second round 59 with a 67 on Saturday.

“Any time you’re leading, you want to try and distance yourself as much as you can so there’s only a few guys who can win the tournament,” said Mackenzie, a veteran of the Web.com Tour and PGA TOUR Canada. “That’s what I was trying to do today. So many guys played well, and it’s a course where you can make lots of birdies, so anyone within eight shots could win.”

Mackenzie owns one win on PGA TOUR Canada, coming at the 2010 Bayview Place Island Savings Open presented by Times Colonist, and says he’s relishing the opportunity to be in contention for a second win tomorrow in Calgary.

“I love being in contention,” said Mackenzie. “I’ve been in contention a couple of times this year. I’m getting more and more comfortable being in that position. It’s just another round of golf and I’m doing the things that I need to do.”

The University of Washington alumnus, who won twice on the All-American Gateway Tour in the offseason, was in the hunt earlier this year in Victoria before finishing tied for second. Currently 10th on the Order of Merit, he’ll have a great chance to solidify his spot in the race to earn Web.com Tour status at season’s end.

“I did what I needed to do today,” Mackenzie said. “It’s going to be a fun day tomorrow. The first three rounds of golf, I couldn’t be more pleased with how I’ve played and hopefully I can handle myself too.”

Mackenzie’s closest pursuers on Sunday will be able to keep a close eye on the 54-hole leader, with round four tee times moved up to due anticipated inclement weather. Players will tee off the 1st and 10th tees in threesomes, and Mackenzie will be joined by Carney and Schnell in the final group. Mackenzie said he was pleased to be ahead of golf’s latest ‘Mr. 59’ given the historic accomplishment.

“The fact that I’m leading a guy who shot 59 on me, that makes me happy,” said Mackenzie. “But he could very likely do it again tomorrow and win by six. Most of the guys inside the top-10 have that ability to go low, and I guarantee that they’re going to be full charge ahead with nothing to lose.”

Two shots behind Schnell and Carney in solo fourth was Victoria, British Columbia’s Cory Renfrew, who posted the round of the day with a 7-under 65 to sit 17-under through three rounds.

SCHNELL RE-FOCUSES ON PURSUIT AFTER MAGIC FINISH
After he holed out from 122 yards on Friday to shoot 59, one could forgive Brady Schnell if he found it difficult to re-focus on the chase for the lead at the ATB Financial Classic on Saturday.

“It’s just going to be one of those things I’ll probably think about a few times over the course of my life. Those things don’t happen every day,” said Schnell.

The buzz of the accomplishment didn’t seem to distract Schnell, though, with the 29-year old continuing the strong play with five birdies on his first eight holes to reach 19-under, where he finished the day.

“I made a nice 12-footer on two to kind of get things going, and it’s always nice to get that first one under your belt, especially after a round like that,” said Schnell. “To be 5-under through eight, I was very happy to keep things rolling.”