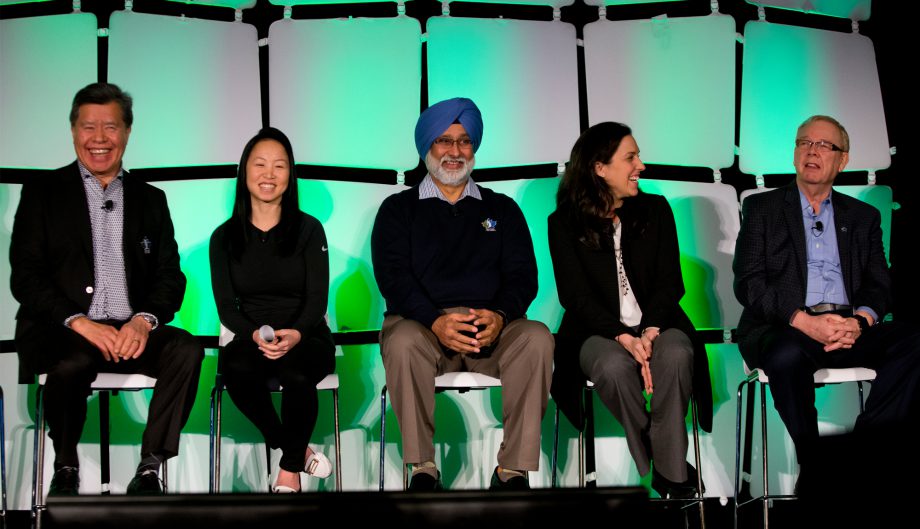 The board of directors of British Columbia Golf was held up as a shining example of inclusion at the United States Golf Association’s North American Golf Innovation Symposium in Vancouver.

“What makes the organization unique and quite frankly unique in golf, as well as unique generally in business, is the nature of inclusion that exists on the board of directors,” the USGA’s Steve Schloss told the symposium at the Marriott Pinnacle hotel.

“Every organization around the world is asking themselves the same question: how inclusive is our board, how effective is the board serving its customers, serving the members, and in this case you have an organization that has far exceeded what most boards do. They have become consciously aware of how to be inclusive to serve their particular marketplace.”

Jonasson told the audience that in recent years British Columbia Golf had cut the size of its board to nine from 50 when the men’s and ladies provincial golf associations amalgamated in 2004. Two years ago, he asked the board to approve adding three more members to help make it more representative of B.C’s diverse golfing population.

“We started to look around and we looked at a lot of the demographic data . . . and we said, you know what, when we show the population of British Columbia who the board of the golf association is, it doesn’t look like the same people that are out on our golf courses. We needed to change that.

“We recognized that we couldn’t do it in a reasonable period of time with only nine people on the board so we said to the nominating committee at British Columbia Golf, we want to increase the size of the board to 12, we want to use those three additional spots to make sure we are more reflective of who actually plays golf. That’s how we got to where we are today.”

Jung, who is of Korean descent, is director of golf at Belmont Golf Course in Langley. She said her background helps her at a club that gets a tremendous amount of play from Metro Vancouver’s growing Korean population.

Kelly, who also serves as president of British Columbia Golf, drew applause when he spoke about how the membership at his course, Gorge Vale Golf Club in Victoria, got youngsters from a nearby First Nations reserve involved in the club’s junior program.

About three years ago, Kelly was informed by a fellow Gorge Vale member about some problems the course was having on weekends. The course borders one of the communities of the Songhees First Nation and on Friday and Saturday nights, some of the band’s young people were hopping the fence and doing some partying on one of the greens.

Kelly was asked if he could speak to the band’s elders and he did a lot more than that. With the blessing of Gorge Vale’s membership, he asked the band’s elders if they would be interested in having some of their young people join the club as junior members.

“They had never been asked before in all the 77 years up to that point and the reaction was very positive,” Kelly said. “We now have 15 First Nations juniors involved in our junior program and they are integrated with everybody else. All the members play with them, help them understand the game and we all provide whatever we can to help them out.

“The other interesting thing about that is the issues on that hole, ever since we took this initiative, have totally disappeared. It’s great.”