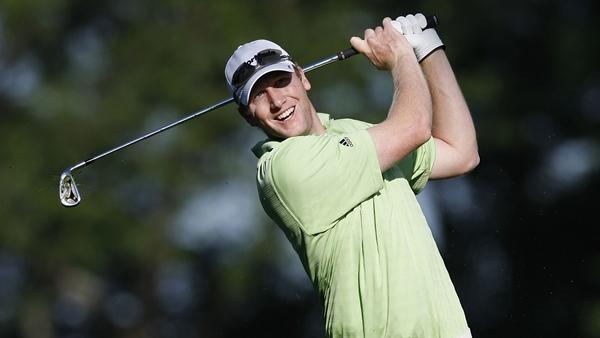 REUNION, Fla. –  Ryan Brehm of Grand Rapids, MI shot a 1-under 71 at the Jack Nicklaus Signature Course at Reunion Resort on Friday to take the lead through three rounds at PGA Tour Canada’s Florida Qualifying Tournament. The 28-year old was the only player at even par or better through 54 holes and held a one shot lead over Dan McCarthy of Syracuse.

The third round was completed Friday following delays originally caused by thunderstorms on Tuesday. More storms caused a two-hour delay Friday. The fourth round began late Friday evening and will resume at 8 a.m. Saturday.

Eighteen players will earn conditional status on PGA Tour Canada for 2014, with the rest of the top 40 plus ties earning conditional status. Brehm, a Michigan State University grad, was the only player at even par or better through three rounds on the demanding Nicklaus course.

“I got off to a bit of a bad start with a bogey on the first hole, but I kept it together and was able to make enough birdies to keep myself in it,” said Brehm, who made birdie at the par-5 18th to shoot a 1-under 71 and take the lead through 54 holes. “Anything under par on this course is pretty darn good. You’ve got to use your brain and really play some smart golf.”

The cut-off for exempt status through 54 holes sat at 6-over par, with five players tied for 17th – a scenario that would produce a five players-for-two spots playoff. The number for conditional status sat at 10-over, with 42 players tied for 35th or better heading into Saturday.

Toronto’s Christian Westhorpe and Vermillion Bay, Ont.’s Jordan Krantz were the top Canadians, tied for sixth at 4-over, while Baddeck, N.S.’s Peter Campbell was also in position to earn an exempt card. Other Canadians in the top 40 included Essex, Ont.’s David Byrne (T-26, +8) and Thornhill, Ont.’s Mark Hoffman (T-31, +9).