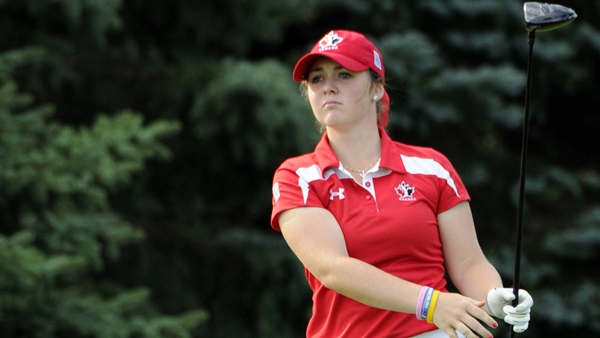 The Golf Association of Ontario (GAO) held it’s annual Ontario Hall of Fame induction ceremony at Wooden Sticks Golf Course in Uxbridge, Ont. Bob Breen, Doug Carrick, Edie Creed and Bill Kerr were inducted as the class of 2015, while Garry McKay was the recipient of the Lorne Rubenstein Media Award.

GAO president Chris Osborne began the evening by introducing the great class of 2015. “When I joined the GAO, I was told I could play lots of golf and meet many cool people. I haven’t seen much of the golf, but I have met many great people and that echoes here tonight. What I like most about golf is it is enjoyed by great people. On behalf of our board, staff, volunteers and Hall of Fame Committee thank you all for coming out and let’s induct this great class.”

The ceremony began with the presentation of the Lorne Rubenstein Media Award to McKay. McKay, who has covered golf for more than 40 years, has written for a number of news publications, golf magazines and hosted golf radio programming. He is a member of the Golf Writers Association of America, the International Network of Golf and is currently the past-president of the Golf Journalists Association of Canada.

“I want to congratulate all of the inductees, they have all had amazing careers,” said McKay. “There are so many people I want to thank, but I really need to thank all of the people in this room because all golfers have great stories and I wouldn’t have had a great career if I couldn’t tell your stories.”

Bob Breen excelled at golf capturing the Ontario PGA Hunt Trophy as a junior, a feat he would go on to do again three times as a senior. He turned pro in 1960 and went on to have tremendous success. He captured 15 victories on the Ontario PGA Tour and another three on the Canadian Tour. Breen also participated in the Canadian Open on 10 occasions, played on the American Tour, where he won the Bahamas International, the Florida tour, where he was a four-time winner, the South American Tour and events on the PGA Tour.

Accepting on behalf of Breen, who passed away in August of 2014, was his son Blair Breen who was visibly emotional about the honour his father was given. “I’m sure that back in the 1950s, when my dad started playing golf he would have never imagined this moment, being inducted into the Ontario Golf Hall of Fame. It is a true honour for him and his legacy to Ontario golf.”

Doug Carrick entered the Ontario Golf Hall of Fame in the builder category. A renowned course designer, Carrick has designed 25 courses in Canada and another four internationally. In addition, he has been involved in the renovations of 45 courses. His courses have earned him numerous awards and have hosted multiple professional events.

“I was traveling in Austria when I received a call from GAO Executive Director Steve Carroll telling me I was to be inducted into the Ontario Golf Hall of Fame and I can tell you I was completely stunned.” said Carrick. “I’d like to thank all of my clients over the years for putting their trust in me to design and remodel their golf courses.”

Edie Creed had tremendous success as an amateur golfer as a member of the Oakdale Golf and Country Club. Her list of accomplishments is long and includes being a 37-time Club Champion at Oakdale. Creed also won the York District Championship in 1982. It was as a senior competitor where Creed made her mark on the game. She captured the Canadian Senior Women’s Championship three times (1979, 1981 and 1982). She also added five Ontario Senior Women’s Championships (1978, 1981-83 and 1986).

Creed talked about her inspiration in golf, her husband Eddie. “I’m honoured to be inducted into the Hall of Fame. I got started in golf all because of my husband Eddie. He always encouraged me to practice and I listened to his advice. While I don’t play golf anymore, my memories are as sharp as the tee, my friendships as long as the fairway. This induction is my eagle.”

Bill Kerr captured the 1945 CPGA Championship, a feat he would go on to replicate in 1960. He also won two Miller Trophy Match Play Championships in 1944 and 1945, another feat he would duplicate while in Quebec in 1947 and 1950.  Throughout his career, Kerr played in six Canadian Opens and the 1961 Masters Championship. He was a five-time winner on the Quebec PGA Tour, the 1956 Bermuda Goodwill Champion, and the 1963 and 1964 CPGA Senior Champion. In addition to his contributions to the game as a head and touring professional, Kerr also served as a two-time President of the Quebec Golf Association and President of the CPGA from 1955-1958.

Accepting on his behalf were Rob Kerr and Bill Kerr III. “Our family is honoured to accept this great award for my father,” said Rob. “He had the chance to play with many great players and also the opportunity to teach many people about the game of golf and he really enjoyed that. It is difficult to have a professional career while running a golf course but he was a determined individual and was able to have a pretty decent career.”

With that the 2015 class entered the hall capping off an excellent Hall of Fame Day celebration.