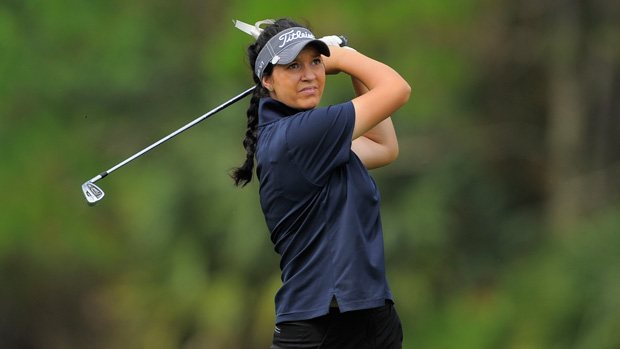 ALBANY, N.Y. – She’s done it as an amateur, but never as a professional. Breanna Elliott (Yarrawonga, Australia) drained a 25-foot birdie putt on the 18th hole to grab sole possession of the 36-hole lead at the Fuccillo Kia Championship at Capital Hills on Saturday. Elliott turned in a 5-under 66 to get to 11-under 131, one shot clear of rookie Augusta James (Bath, Ontario).

Saturday was another scoreable day as 44 players posted rounds in the 60’s.

Elliott, whose best finish this year is a tie for 24th last week in Rochester, will look to be the first Aussie to win on the Symetra Tour since Julia Boland won the 2012 Four Winds Invitational.

“Yes, a win would be huge, obviously it would be awesome to get a win under the belt,” said Elliott, who has been smiling from ear-to-ear the entire week. “Especially since I’m playing away from home, it would mean a lot to show people that I am taking my game to the next level.”

Elliott stepped on the 18th tee box in a share of the lead and landed her tee shot on the par-3 pin high and inches from the fringe.

“I wasn’t pulling the trigger today and I was leaving putts short so I gave that last putt a little extra,” said Elliott. “That was a nice way to finish and I think I needed that one.”

There is no doubt Elliott has elevated her game this week. She has 12 birdies against just one bogey through 36 holes. Her length off the tee has really helped. She is averaging 267 yards with the driver and has hit 33 of 36 greens in regulation.

“My whole season has kind of led up to the last couple of weeks,” said Elliott, who ranks 78th on the Volvik Race for the Card money list. “I’ve been hitting the ball well all season and to finally be up there on the leaderboard is something I was hoping would happen. One good week can really turn your year around and last week was a good confidence booster for me.”

Elliott also got a boost of confidence two weeks ago when she played in the U.S. Women’s Open and played practice rounds with Karrie Webb, Michelle Wie and Stacey Lewis.

“From watching them play, I definitely saw that they were all aggressive,” noted Elliott of the top players in the world. “I feel like my game is there and I need to go for it instead of playing defensive golf like I have in the past. Players like Karrie that just go for the pins is really inspiring.”

The 23-year-old enjoyed a successful amateur career that included seven wins in 2012. Her best finish on the Symetra Tour is a tie for 12th at the 2014 Four Winds Invitational.

A win could move Elliott as high as 21st on the Volvik Race for the Card money list and put her in striking distance of the top 10 with eight events remaining.

The winner of the Fuccillo Kia Championship will also drive away in a 2015 Snow White Pearl Kia Optima LX courtesy of Fuccillo Kia of Schenectady.

JAMES AIMS FOR WIN NUMBER TWO: Augusta James is potentially one big finish away from locking up an LPGA Tour card. She has the chance to do that Sunday after carding a 4-under 67 to get to 10-under 132 at the Fuccillo Kia Championship at Capital Hills.

James, who started on the back nine, finished with back-to-back birdies on holes eight and nine to put an exclamation point on her day.

“It was definitely important to end with birdies because I wanted to finish strong and I felt like there was more in my round than what I was at after hole six which was just 2-under,” said James, who curled in a 20-footer to end the day. “It was a little bit outside regular range, but you have to hit a few of those to shoot low numbers.”

“I’m happy with the spot I put myself in for tomorrow,” said James, who was followed by a large group of friends and family again on Saturday. “I have really great hometown support and a great community that I live in. They are very special and for them to come down here means a lot.”

James won the Chico’s Patty Berg Memorial earlier this season and could become the first player to win two official events this season. She currently ranks ninth on the Volvik Race for the Card money list, but is just $1,495 in front of number 11 on the money list (Casey Grice).

“Of course you look at the money list, but then you have to give your head a shake and stop,” said James. “As cheesy as this sounds, it really is about one shot at a time and one moment at a time. If you get ahead of yourself, it is really game over.”

Every player that has won at least twice in a single-season has earned their LPGA Tour card.

In her win earlier this season, James entered the final round one shot off the lead and carded a 5-under 67 to win by four shots. She’ll be one shot back on Sunday.

BROOKE HENDERSON ‘EXCITED FOR SUNDAY’: Brooke Henderson has played in four Symetra Tour events this year. She is a combined 16-under on Sunday in those four events. Last week, she carded a 6-under 66 in Rochester to finish in a tie for seventh. On Saturday, Henderson posted a 5-under 66 to give herself a chance at her second Symetra Tour win.

“I made a lot of putts, which is always nice,” said Henderson. “I’m now very comfortable around this golf course and I’m excited for tomorrow.”

Henderson has finished in the top 10 in all four Symetra Tour starts including a win at the Four Winds Invitational. She currently ranks 39th on the Volvik Race for the Card money list.

Henderson was asked if she plans on being aggressive early to make up the deficit.

“Generally, I am an aggressive player from the get go so I’ll just stick to that plan,” said Henderson. “I’m going to try and push early to put a little pressure on the leaders.”