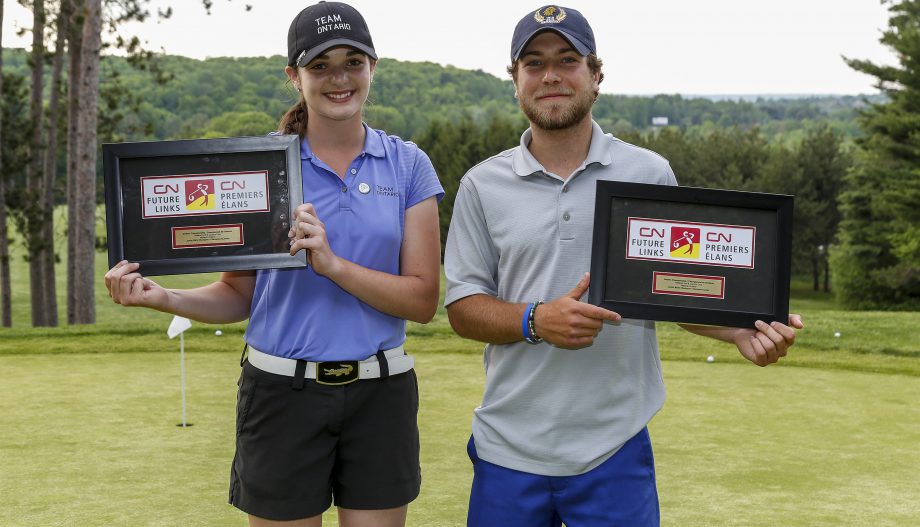 MIDLAND, Ont. – A hot and humid day, punctuated by a booming thunder clap, closed out the 2016 edition of the CN Future Links Ontario Championship at Midland Golf & Country Club. Brandon Lacasse and Isabella Portokalis emerged from tight groups of competitors to claim the Junior Girls and Junior Boys titles.

The Junior Boys leaderboard was crowded throughout the final day of competition. Lacasse separated himself from the group and the Châteauguay, Que., product matched his second-round 70 to finish 212 overall. The 18-year-old, who entered the day with a share of the lead, finished with two birdies for a two-stroke victory.

“I just tried to play as if it was a fun round,” said Lacasse. “I always finish second or third, so I’m happy to finally win a big tournament.”

Lacasse noted the bittersweet nature of the victory with this being his final year of eligibility on the junior circuit. “It’s fun to finish with a win,” he said. “Last year, I finished sixth at the Canadian Juniors, so maybe a win this year will help me perform better.”

Toronto’s Tyler Nagano remained competitive throughout the round, tallying four birdies, but could not catch the leader. The 17-year-old finished 4-over 214, while Beaconsfield, Que., native Remi Chartier earned third-place with a 69 – his lowest round of the weekend.

A clap of thunder forced the brief suspension of play with players being evacuated from the field due to safety concerns. After players returned to the course, Vancouver’s Tiffany Kong and Surrey, B.C., native Hannah Lee began play before the championship committee had allowed the resumption of play. After careful review of the situation, the committee decided to waive the penalty of disqualification as per Rule 6-8: Discontinuance of Play; Resumption of Play, and to issue each with a two-stroke penalty.

Isabella Portokalis tallied a pair of birdies en route to a 2-over 72 on the day. The London, Ont., native made par on hole 18 to sit 6-over 216 alongside Kong. When the two-stroke penalty was applied following the round, Portokalis claimed the win by two strokes.

“I just tried to keep calm and keep making pars, and if a putt went in then that was great,” said the 14-year-old when asked to reflect on the day. “I got into the scoring tent and everybody said that I won and I didn’t even realize it.”

Portokalis sees this victory as a building block towards future success, including the 2016 Canadian Junior Girls Championship in August. “Now I know that I can win any tournament,” she said. “I was three back on the first tee, but I bounced back on the back nine.”

Kong and Lee – members of Team Canada’s Women’s Development Squad – claimed second- and third-place in the tournament. Kong collected four birdies and an eagle on hole 15, but finished with a 2-over 72 showing. Lee finished third following a 75.

All players within the Top-6 in the Junior Girls division earned entries into the 2016 Canadian Junior Girls Championship from August 2-5 at The Links at Penn Hills in Shubenacadie, N.S. Ellie Szeryk (London, Ont,), Monet Chun (Richmond Hill, Ont.), and Grace St-Germain (Orleans, Ont.) will compete alongside Portokalis, Kong, and Lee.

Additional information regarding the 2016 CN Future Links Ontario Championship can be found here.