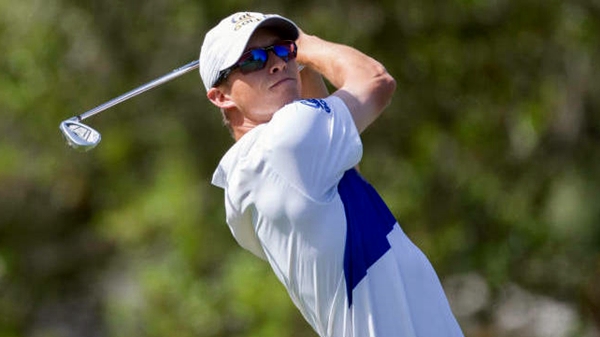 BEON EOIN, NS – Westlake Village, California’s Brandon Hagy shot a 7-under 65 at The Lakes Golf Club on Thursday to take the first round lead at the Cape Breton Celtic Classic presented by PC Financial.

The 23-year old University of California grad is playing the event on a sponsor’s exemption and proved he was worth the selection on Thursday, carding seven birdies, an eagle and two bogeys to lead by one over Grand Rapids, Michigan’s Matt Harmon.

“It’s actually the second time I’ve been here in about two months, so it’s a long way, but I seem to like the place,” said Hagy, referring to his start at the Web.com Tour’s Nova Scotia Open in July in Halifax, where he made the cut and finished T40. “This is my sixth professional event, so it’s still pretty new for me. I’m just trying to get some experience against some good competition.”

Hagy is coming off a brilliant collegiate career that saw him named a 2014 PING All-American, and comes to Cape Breton in search of experience as he sets out on his professional career. With a stretch on Thursday where he went 9-under for nine holes at one point, Hagy said he learned a lot from his opening round.

“That’s one of the toughest things in golf to learn, when you start taking it deep like that how to stick to your process,” said Hagy, noting his bogey on the eighth hole (his 17th) that dropped him to 7-under. “I didn’t do a great job of it, so it’s something where the only way you can get comfortable in that situation is by shooting those scores more often.”

One shot back of Hagy was Harmon, the current Order of Merit No. 4, whose timely round could see him make a move up the top of the standings this week. All four other members of The Five – Joel Dahmen, Tim Madigan, Brock Mackenzie and Josh Persons – were over par on Thursday, leaving Harmon with a head start in hopes of making a move this weekend.

“I’m just trying to finish out the season strong and maybe pay for some expenses later,” said Harmon, downplaying the race for the top spots on the Order of Merit. “It was nice to get off to a good start, and I’m looking forward to playing in the morning tomorrow.”

North Vancouver, B.C.’s Eugene Wong continued what has been a solid 2014 season on Thursday, opening with a 4-under 68, the second best score of the morning wave. Though he’s been consistent with seven made cuts and five top-25s, the 23-year old said he’s looking for more consistency in putting four rounds together.

“I’ve had some struggles on one day, but I think I figured out the reason why I would have one bad round out there. I need to keep it more in play and not be so aggressive,” said Wong, who posted five birdies and one bogey on the day. “Sometimes I push myself too hard to try and catch people.”

With two events to go, Wong finds himself in good position to be rewarded for his 2014 season at 16th on the Order of Merit. In addition to The Five earning status on the Web.com Tour, the top 10 players at season’s end earn an exemption into the final stage of Web.com Tour Q-School, with the top 20 getting into the second stage.

“My first goal is to be top-10 at least, to get into Final Stage if not second. But yeah, I’m just trying to let my game do all the work,” said Wong. “I try not to think about it. Obviously it’s on the back of your mind, but for me, I know if I play to my abilities I should be able to get in the top five or so.”