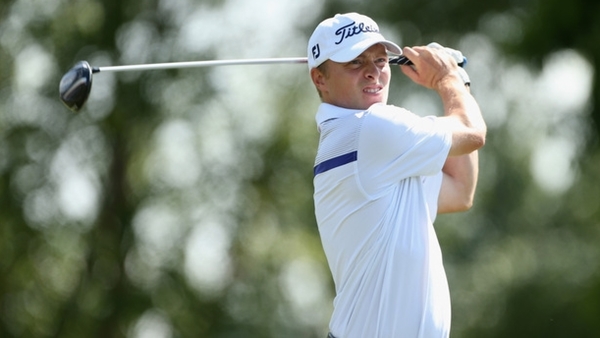 (COURTENAY, BC) – California’s David Bradshaw opened up a massive lead at PGA Tour Canada’s British Columbia Qualifying Tournament Wednesday, firing a 10-under 62 at Crown Isle Resort and Golf Community to lead by 10 shots through 36 holes.

Bradshaw’s 62 is a competitive course record at Crown Isle and gave him a 17-under par total, following his opening 65 in Tuesday’s first round. Summerland, B.C.’s Greg Machtaler was in solo second at 7-under after a second round 69.

“I was hitting it great and putting really well. I had one little blip when I three-putted nine, but I made everything I looked at,” said Bradshaw, who carded 11 birdies on Wednesday. The 31-year old said any thoughts of shooting 59 were dashed after three-putting the ninth hole – a turn of events that Bradshaw said actually helped him on the back nine.

“When I got to 5-under on eight, it occurred to me that I could do it,” said Bradshaw of the potential for a sub-60 round. “But when I three-putted nine, it kind of relaxed me because I knew it was done with and I could just focus on the next shot.”

With a double-digit lead heading into Thursday’s third round, Bradshaw said he’s going to focus on the tasks at hand as much as possible.

“Golf’s a weird game. It seems like the more you focus on the individual shot, the better they total at the end,” said Bradshaw, who is coming off an appearance two weeks ago at the Zurich Classic of New Orleans, where he Monday Qualified to play on the PGA Tour for the fourth time in his career.

Machtaler carded five birdies to offset a double bogey and give him a 3-under 69, his second straight sub-60 round for the week.

“I’m really happy with where I am and how I’ve played,” said Machtaler, who said he’s looking forward to the challenge of two more Q-School rounds. “They’re definitely not comfortable rounds, so I couldn’t ask for more to be where I am right now.”