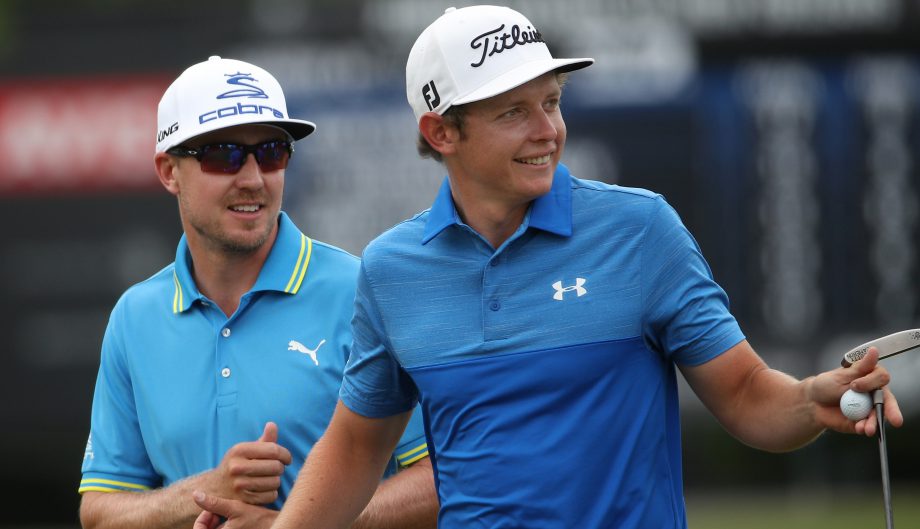 AVONDALE, La. – Jonas Blixt of Sweden and Cameron Smith of Australia apparently are enjoying playing as teammates too much to be unsettled by wind gusts reaching 36 miles per hour.

The pair extended their bogey-free run to three rounds in the new team format at the Zurich Classic, deftly adjusting to winds that unsettled many other PGA Tour pros and posting a 4-under 68 Saturday to widen their lead to four strokes.

“It’s like going back to playing as a kid,” the 33-year-old Blixt said. “I don’t feel like there’s any stress at all out there.”

Alternating shots on Saturday, as teams did in the first round, the Blixt-Cameron partnership posted four birdies to improve to 19-under, building on a lead that stood at one shot through two rounds. They are the only team without a bogey.

“Feels like back in the amateur days,” Smith said of playing in the first team event held on the PGA Tour since 1981, about 12 years before he was born. “It’s just nice to go out there and relax and have some fun.”

The Kevin Kisner-Scott Brown and Nick Watney-Charley Hoffman teams were tied for second. Canadians Graham DeLaet and David Hearn (73) were tied for 31st at 7 under. Also in contention are Jordan Spieth and Ryan Palmer, five shots behind – although they could have been several shots closer if not for some uncharacteristic misses of short putts by both players.

Spieth missed a 3-footer for birdie on the par-5 18th, wasting Palmer’s well-executed 86-yard approach shot. Throughout the round, Spieth was among players backing away from shots when they sensed a gust building and said the wind affected putting “significantly.”

“When you get a putt where the wind is blowing one way and you’ve got the grain the other, and the hill back with the wind, you just have no idea what that putt is going to do,” Spieth said. “If it gusts or doesn’t gust when you’re over it, it affects the putt by an entire cup, even from 6 or 7 feet. It’s really a guessing game.”

So expect more guessing in the final round, which will start earlier than planned – at 6:40 a.m. – because of rain in the forecast. The format will return to “best ball,” as in the second round, with each two-man team taking the best score of either player per hole.

Palmer narrowly missed par putts from within 3 feet on the second and 13th holes.

Blixt and Smith didn’t fail to execute many shots on the 7,425-yard TPC Louisiana course, which was carved out of cypress swamp and has a number of water hazards from which alligators took in the action, some climbing onto the course at the water’s edge.

The pair quickly recovered from minor errors or bad bounces. They wound up attempting only one par putt longer than 8 feet; Blixt rolled it in from 11 feet on the fifth. Blixt also made a putt of nearly 18 feet for birdie on the third hole.

“Sometimes things, bounces, stuff like that weren’t going our way, and we managed to get it up near the green and get it up and down, which kept the momentum going,” Smith said.

Brian Stuard, who won the Zurich last year when it was a traditional stroke-play event, and teammate Chris Stroud were alone in fifth at 13-under.

The teams of Kelly Kraft and Kevin Tway, and Angel Cabrera and Julian Etulian, were tied for sixth at 12-under.

Seven teams were tied for eighth at 11-under, including popular Gulf Coast native Bubba Watson and teammate J.B. Holmes.

As much fun as Blixt and Smith seem to be having, the pressure could mount a bit as they try to protect their final-round lead. Each golfer takes home $1.02 million and 400 FedEXCup points. Never mind the fact that the 23-year-old Smith has never won a PGA Tour event. But Smith noted that with each team keeping the best score per hole in the final round, there’s always the possibility for the veteran Blixt, who has won twice, to pick up the slack.

“I feel very comfortable going into tomorrow,” Smith said. “Jonas is playing so well … it’s just like having a backup.”