Blixt, Smith surge ahead in second round of Zurich Classic 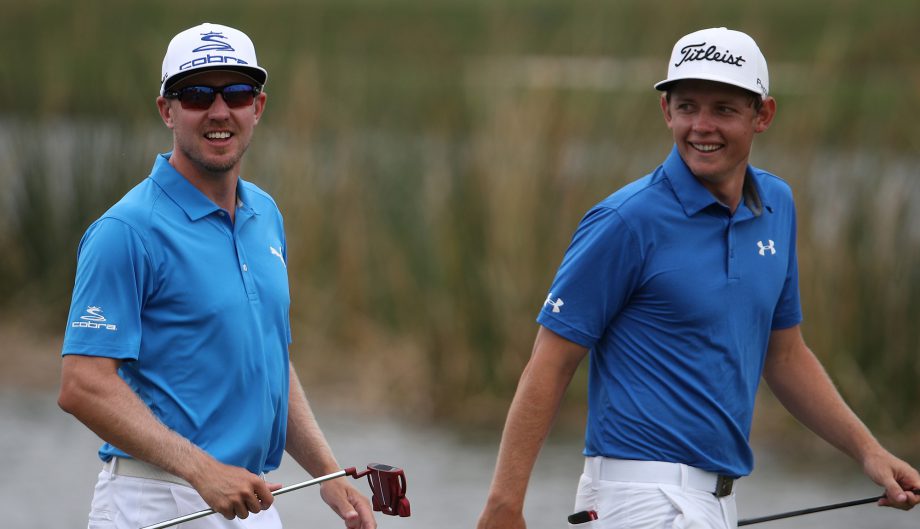 AVONDALE, La. – Jonas Blixt and Cameron Smith posted a 10-under 62 in Friday’s four-ball format to move into the lead at the Zurich Classic, which is in its first year of a new team format.

Blixt and Smith have a two-day total of 15-under 129 to lead by one over Patrick Reed and Patrick Cantlay. The K.J Choi-Charlie Wi and Troy Merritt-Robert Streb pairings are tied for third at 13-under.

The four-ball format has each member of a two-man team playing his own ball throughout a round, with only the best score on each hole recorded. The same format will be used Sunday. The first and third rounds have an alternate-shot format.

“Jonas is playing really well at the moment,” Smith said. “You know he’s going to make a birdie or par, so I’m just playing aggressive and letting it all fall into play.”

The change from the alternate-shot approach produced much lower scores Friday, even as heavy winds impacted the TPC Louisiana course.

The Blixt-Smith, Reed-Cantlay and Merritt-Streb duos were among five teams to post a 62. Tyrone Van Aswegen and Retief Goosen teamed up for a 60 to get to 11-under for the tournament.

“We just blended so well today,” Van Aswegen said. “I made birdie and then he made birdie. It was great. It was a privilege out there.”

Those extraordinary low scores caused the two first-round leaders to fall off the pace a bit.

Jordan Spieth and Ryan Palmer had posted a 66 in the first round to share the lead with the Ryan Ruffels-Kyle Stanley duo. Both teams posted a 66 again Friday and fell into a six-way tie for fifth place.

With strong winds expected again as the tournament returns to alternate shots, the scores likely won’t be nearly as favourable.

“Certainly off of (Thursday’s) round, we know that we can have success in that format,” Spieth said. “We also know we need to set expectations a bit different. We had prime scoring conditions yesterday, and tomorrow it will be a bit like today or even more challenging. Anything under par in alternate-shot is a great score tomorrow.”

The Zurich Classic was a standard individual tournament until changing formats this year. This marks the PGA Tour’s first official team event since the 1981 Disney Classic.

Two of the higher-profile teams in this new format weren’t able to advance to Saturday’s third round. Justin Rose and Henrik Stetson ended up at 6-under to miss the cut by one shot. Jason Day and Rickie Fowler also missed the cut at 5-under.

“I think the format is a unique format,” Day said. “Missing the cut is not what we wanted, but walking away from this, I think they’re heading in the right direction with regards to a different format that adds more flavour to the PGA Tour.”