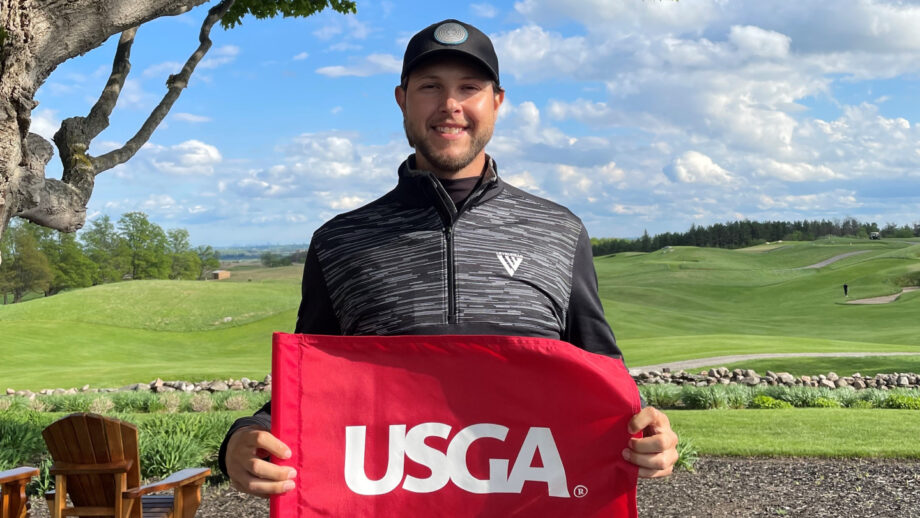 CALEDON, Ont. – If you think you’ve heard the name Michael Blair before, it’s because you have. The Ancaster, Ont., native, who competed in the 2019 RBC Canadian Open, is now vying for a spot at this year’s U.S. Open and his odds just got a whole lot better.

The 30-year-old withstood inclement weather conditions in what seemingly was just another day at the office for Blair, who fired a cool 2-under par 69 at The Pulpit Club (Paintbrush course) on Monday to earn medallist honours in the local qualifying round.

Blair wasted no time getting to work on Monday morning as part of the first pairing to tee off in Caledon, Ont., and set the tone early for the remaining 75 players in the starting field.

After an even par showing on the front nine, he knocked down three birdies coming in, to claim the early clubhouse lead – one that was ultimately never surrendered.

Riley Goss of Toronto, Ont. solidified his spot in the Final Qualifier with a 1-under 70, as a result of two birdies on his final five holes of the day. Goss also eagled the par-5 No. 8 earlier in the round.

Then, things got interesting:

What does that equal? A playoff.

Jeff Fang, Steve Gonko, Chris Crisologo, David Li Sheman and Branson Ferrier entered the pot in hopes of pencilling their names into the next stage and with the stakes high, it was the latter trio of names who prevailed.

Cosologo, Sheman and Ferrier’s pars on the first playoff hole proved good enough to see them through to the final stage of qualifying for the 122nd U.S. Open at The Country Club in Brookline, Massachusetts.

Fang and Gonko will serve as alternates in the event that one of the qualifiers opts out of the final stage.

Players will be designated to the course of their choice for the Final Qualifier. To see the list of Final Qualifying sites click here.