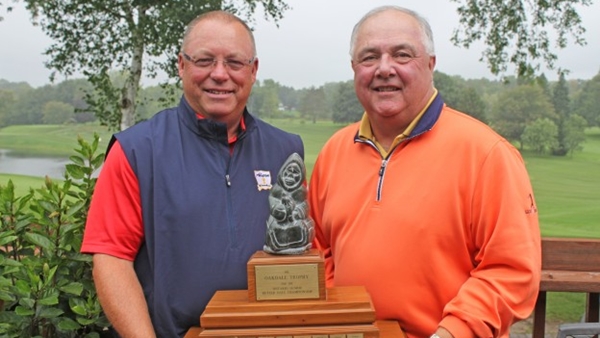 ST. THOMAS, Ont. — As the Golf Association of Ontario’s (GAO) season comes to an end, the final senior men’s event took place Sept. 11 at the St. Thomas Golf and Country Club. There were 55 teams of senior men, 55-years-old and over, that took to the course in damp, fall-like conditions for the Senior Men’s Better Ball Championship.

With many great teams taking part, it was assured there would be many great scores. By the end of the day there were 16 total teams under par. No team scored better than that of Collingwood’s Michael Jackson and Welland’s Sandy Billyard, who posted the low round at 7-under (65). The difference for the duo came on the ninth hole when Billyard, from Hunters Pointe Golf Course, hit a hole-in-one on the par three.

“It really seemed to get us going,” said Jackson. “Up until then we had made eight straight pars. Sandy played a great round of golf today.”

The ace galvanized the team as they went on to play the back nine 5-under and finished the day 7-under (65).

“Number 9 was the nicest shot I hit all day!” said Billyard. “It was a four-iron, 180 yards up hill. It landed just in the right spot and rolled in like a putt. Mike made a clutch birdie on 17 and that was the winner for us.”

It is the first time that either Jackson, Georgian Bay Club, or Billyard have won the Senior Men’s Better Ball title.

“The win means a lot to me because I haven’t won a provincial event since 1973,” added Billyard. “I’m thrilled. For Mike, it is just another notch in his belt.”

“It is always nice to win a tournament but it was especially nice to win with Sandy. We didn’t make a bogey all day and just played a solid game,” added Jackson.

Finishing second was a team from host St. Thomas Golf & Country Club – Stephen Brodie and John Scott. The two used their hometown knowledge of the course to their advantage finishing 6-under (66).