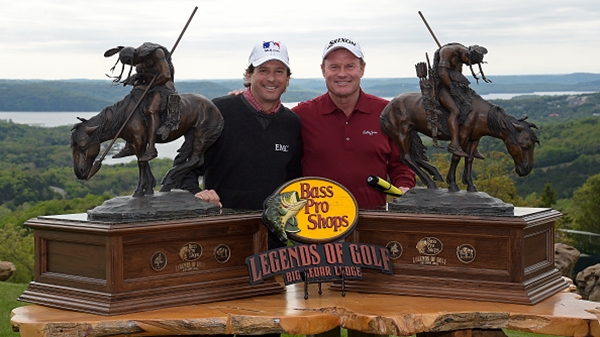 RIDGEDALE, Mo. – Joe Durant had a hole-in-one and teamed with Billy Andrade to win the Champions Tour’s Bass Pro Shops Legends of Golf on Sunday at Big Cedar Lodge.

Andrade and Durant closed with a 9-under 45 at the par-3 Top of the Rock course, playing nine holes of modified alternate shot and nine of better ball. Durant aced the third hole on the second nine, using a 7-iron on the 167-yard hole.

“You don’t know when those are coming,” Durant said. “I just hit a good solid shot. I was just trying to hit it right of the flag … and it just happened to go in the hole. You’ve still got to keep going. You’ve got to regroup after something like that. We stepped up the last five holes and did what we needed to do. I couldn’t have a better partner. I was so excited to win with my buddy. It feels really good.”

Durant and Andrade finished at 19-under 159 in the 54-hole event, opening Thursday with a better-ball 63 on Buffalo Ridge’s regulation Springs course and shooting a 51 on Saturday in high wind on the par-3 course. They each earned $230,000 for their first victories on the 50-and-older tour.

“It was an unbelievable week,” Andrade said. “We ham and egged it very, very nicely and Joe hit some beautiful shots today. The hole-in-one was fantastic. I can’t be more excited to be in a situation to win out here because this is what we want to do. This is our goal, to try to get in the winner’s circle, and to do it like this and do it with Joe has been such a treat for me.”

Sandy Lyle and Ian Woosnam tied for second, three strokes back after a 51. The former Masters champions took a two-stroke lead into the final round.

Moments after Durant’s ace, Mike Reid had a hole-in-one on the eighth hole. He used a 4-iron on the 194-yard hole. Reid and Dan Forsman tied for 10th at 13 under.

Nelson and Fleisher birdied the final hole for a 1-under 26 for nine holes of better ball on the par-3 course. They finished at 12 under in the 45-hole event.

“We played really well,” Nelson said. “Yesterday was just a miserable day to play golf. I mean, it was windy, gusting. Sometimes I couldn’t stand up hardly. It was amazing how hard the wind blew and for us to hold it together there. And today was just kind of a fun walk around nine holes and not trying to hurt ourselves.”

Nicklaus and Player had two birdies in a bogey-free 25.

“It was a very exciting week, a very different format,” Player said. “I think golf needs more of this.”