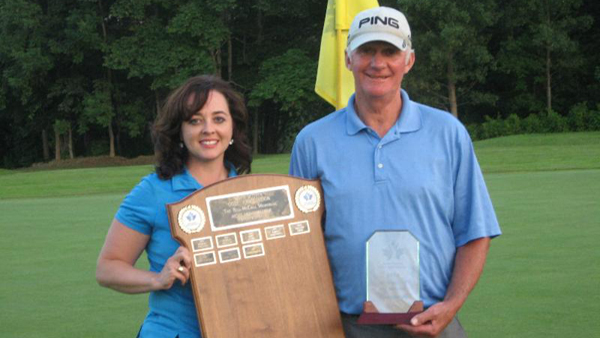 Bill Burns of Sydney, NS claimed his first major title at the MCT Insurance Mid-amateur this weekend, and in doing so accomplished a lifelong goal.

“It really feels incredible,” he said. “I have been playing these events since I was 24 hoping I could win one and to win one today at 62 is simply awesome.”

Burns, entered the day with a one stroke lead over Aaron Nickerson, and never relinquished his hold on first place on his way to a four stroke win Sunday at Abercrombie Golf and Country Club.

Burns battled a challenging course and was admittedly nervous playing against experienced golfers like Aaron Nickerson, but said he was happy with how he handled himself.

“I was really nervous on the last few holes,” he added. “Aaron’s a great player and he has experience in these situations and won titles before, but I am really happy with how I kept my composure to win”.

Along with an impressive mental game, his play never hinted at the fact he is coming off a recent hip surgery, one that will unfortunately mean he will have to miss the Canadian Men’s Mid-Amateur Championships this year.

Burns, an accomplished athlete, was inducted into the Cape Breton Sports Hall of Fame in 2012, but this latest win may be his new career highlight.

“When I won the Four Ball a few years back at Lingan that was my proudest moment, but now this has to be it,” he explained.

Second place was a 3-way tie at +10 between Nickerson, Steven Ward, and Glenn Robinson.  Nickerson, Robinson, Paul Coulson, and Chad Hoffman will represent Nova Scotia at the National Championships in Barrie, Ontario.

Bill intends to defend his latest title next year when the Mid-Amater will be held at the Lingan Golf and Country Club.