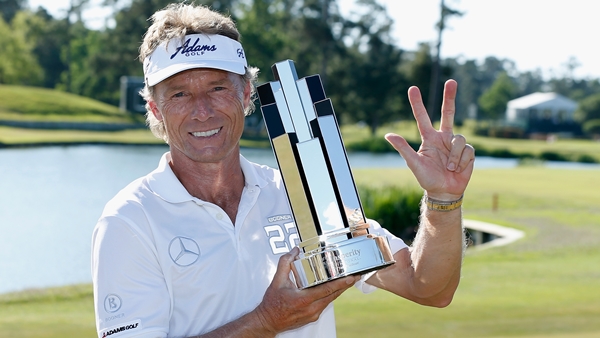 THE WOODLANDS, Texas – Bernhard Langer won the Champions Tour’s Insperity Invitational for the third time, closing with a 1-under 71 on Sunday for a one-stroke victory over Fred Couples.

The 56-year-old German player also won the 2007 event at Augusta Pines and successfully defended his title in 2008 at The Woodlands. He opened this season with a victory in Hawaii.

“I’m hoping to add to that number,” Langer said. “I hope I’m not done yet. I’m very blessed to have won 20 times in 6 1/2 years. It’s been a great run and a wonderful achievement. I just feel like I’m playing some of my best golf in my career.”

Couples, the former University of Houston player who won the 2010 event, finished with a 67. He won in March in Newport Beach, California.

“On a golf course as hard as this, you can’t really play relaxed golf,” Couples said. “You have to pay attention to what you’re doing. I didn’t hit enough good shots to shoot a lot lower to catch Bernhard, although I got close to him.”

Colin Montgomerie was third at 9 under after a 70. His best finish on the tour is second in March in Newport Beach. The Scot had no complaints about his finish.

Esteban Toledo, the winner last year, was 7 under after a 71. Jay Haas and Tom Pernice Jr. tied for fifth at 6 under. Haas shot his third straight 70, and Pernice had a 71.