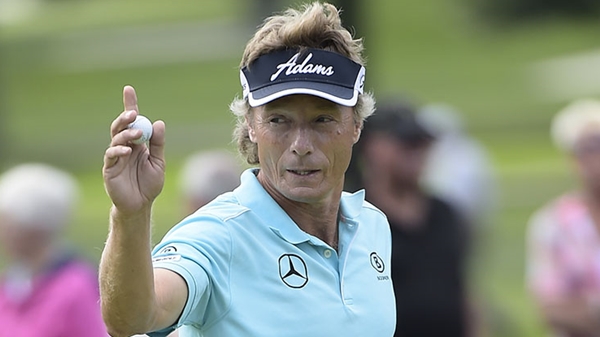 ENDICOTT, N.Y. – Bernhard Langer rallied to win the Dick’s Sporting Goods Open on Sunday for his fifth Champions Tour victory of the year, while Kevin Sutherland followed his tour-record 59 with a 74 to drop into a tie for seventh.

The 56-year-old Langer closed with a bogey-free 66 for a one-stroke victory over Woody Austin and Mark O’Meara. Langer did not make a bogey in the event and finished at 16-under 200 at En-Joie for his 23rd career victory on the 50-and-over tour

“It doesn’t happen very often you go through a tournament without a bogey,” Langer said.

Sutherland, the second-round leader, had five bogeys – four on the first 10 holes – and three birdies in the final round. Playing his third Champions Tour event since turning 50 in June, he finished at 12 under.

Sutherland said he was pressing too much early.

“So, I made some dumb bogeys,” Sutherland said. “Just got myself behind early. I was surprised I didn’t play better today. A lot of energy was expended (Saturday) and I think I had a hard time just getting into the round.”

“I knew I was close,” Langer said. “I just tried to keep my head down and make quality shots. When I looked at 16, I saw I was one up on someone who had already finished the round and figured I would be OK if I just parred out.”

That he did, and won for the first time with his daughter, Christina, serving as his caddie.

“I was more nervous for her than for me,” Langer said. “We hadn’t won a tournament with her caddying, though I’ve won a couple with my son. It’s always special when your kids are caddying.”

Christina is a junior at Florida Atlantic University.

Langer, tied for fifth with Bob Charles on the tour victory list, earned $277,500 to increase his tour-leading total to $2,652,520. The German has three victories in his last five starts.

Steve Lowery had a 72 to tie for fourth at 13 under. After challenging Langer for most of the round he hit into the pond on the par-3 14th en route to a double bogey and dropped another stroke on the par-4 15th.

On the 14th, Langer made a 20-foot birdie putt for a three-stroke swing.