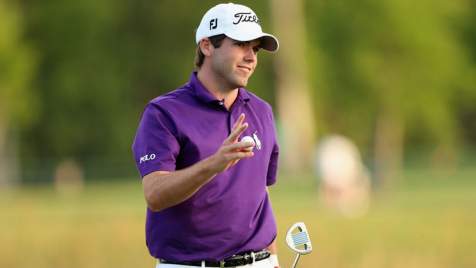 AVONDALE, La. – Ben Martin treated a tiny gallery to a course-record round, shooting a 10-under 62 on Thursday in the first round of the Zurich Classic.

Martin’s 10th birdie was his most spectacular shot in a round full of them as he chipped in from 55 feet on the par-3 17th hole. That came a hole after the 26-year-old former Clemson player he hit the flag on a chip from behind the green, setting up a tap-in par.

The previous record at TPC Louisiana was a 64, accomplished many times, including once earlier Thursday, when Andrew Svoboda did it to take a lead that held up until Martin surged past late in the day.

Peter Hanson and Sueng-Yul Noh were tied for third at 65.

Martin matched his career best Sunday with a third-place tie in the RBC Heritage at Hilton Head, S.C. He also finished third last month in the Puerto Rico Open.

Like Martin, the 34-year-old Svoboda has never won on the PGA Tour and appreciates how much can change in the next three rounds. At the same time, New Orleans has seen its share of maiden tour triumphs. It has happened in six of the past nine years, and 10 of the past 16.

Svoboda’s best career finish on the PGA Tour is a tie for 15th at the Shriners Hospitals for Children Open in Las Vegas last October.

Hanson’s round was highlighted by an eagle on the par 4 sixth hole. After a 277-yard drive to the middle of the fairway, Hanson knocked in his second shot with a 6-iron from 183 yards.

Hanson noted that he used the same club for a hole-in-one during a practice round at Lake Nona in Orlando, Fla., last weekend.

“So it’s holed out twice in the last five days,” Hanson said.

Hanson, who missed the cut at the Masters, said the key to his strong start in New Orleans was probably putting away his clubs for four days after returning from Augusta and trying to relax more.

“We want to do this so exact and be so precise,” Hanson said. “I over-read putts and overanalyze the shots, trying to figure this game out. I think sometimes you have to let the score come to you instead of you going after it.”

Erik Compton, Chad Collins and Michael Thompson were tied for fifth at 66, and Jeff Overton, Stuart Appleby and Robert Streb followed at 67.

Compton, a two-time heart transplant recipient, spent the early part of the week talking to children with heart conditions at a New Orleans-area hospital and also participated in a junior golf clinic. Although that limited his practice time, he thought it put him in a good frame of mind.

“It seems to really relax me and really puts things in perspective,” Compton said. “I seem to play better during the weeks where I have hospital visits.”

On the par-5 seventh, his 297-yard drive sailed right of the fairway, crossing a cart path. He then belted a 227-yard shot out of the rough to the foot of the green and two-putted for birdie. On eight, he cringed disgustedly as he left a 1-foot birdie putt on the lip of the hole, but responded by closing his round with a 22-foot birdie putt on nine to briefly put him atop the leaderboard.

“This is a course that I feel very comfortable on,” said Compton, also winless on the PGA Tour. “You have to hit a lot of long iron shots and drive it well here, and those are some of the strengths of my game.”

Graham DeLaet is leading the Canadian charge. The Weyburn, Sask. native is tied for 20th at 3-under par.

David Hearn opened with a 1-under 71 and sits tied for 54th.

Mike Weir, Stephen Ames and Brad Fritsch were 2-over on the day after all firing 74s to sit among a group tied for 114th.