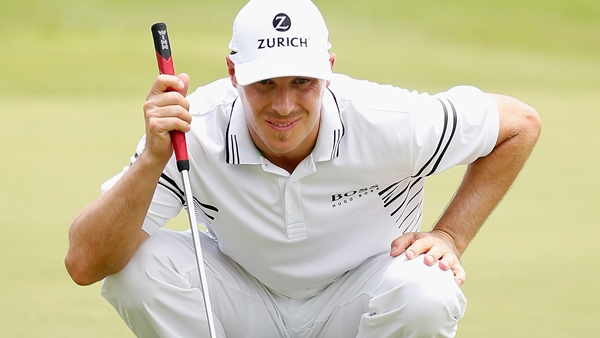 MEMPHIS, Tenn. – Ben Crane’s back is OK, and his putter couldn’t be working much better.

The combination helped him shoot a 5-under 65 on Friday to open a six-stroke lead in the St. Jude Classic before heavy rain delayed play twice and forced the suspension of play for the day.

Crane birdied his final hole Thursday night for a 63 and rolled in a 44-footer for birdie to start the second round Friday morning. He had a 12-under 128 total at TPC Southwind, matching the winning score in relation to par last year.

“I certainly didn’t see this coming,” Crane said. “But you know when you’re putting well, I started to feel like I was a little more in control of my ball, just felt like I was tightening my draws and fades a little bit. I had access to some holes I haven’t this year and so gosh, it’s been an incredible two days.”

Crane has spent the past six months changing his swing to protect his back. A four-time PGA Tour winner, Crane’s last win came in 2011 at the McGladrey Classic and his best finish this year was a tie for ninth in the Humana Challenge in January. But he was in such pain he had a therapist with him for treatment during the round.

“It’s been a really, really hard year, racking my brain what’s going on, what’s going wrong and have I changed that much,” Crane said. “You start wondering, `Am I going to get it back.’ So this is super encouraging. My wife said last night, `looks like you still got it.’ Because you wonder. But anyway, it’s been a fun start.”

Carl Pettersson and Jason Bohn were tied for second at 6 under. Pettersson had one hole left, and Bohn had two to play. Davis Love III (70) and Billy Horschel (68) were in at 5 under.

Phil Mickelson and Retief Goosen were unable to start the second round. Mickelson, winless in his last 19 events since the British Open, opened with a 67 on Thursday, and Goosen had a 66.

Friday got off to a slow start with 60 players needing to wrap up the first round with the second started 40 minutes later.

Lightning delayed play at 1:03 for 59 minutes before play resumed for 13 minutes. Mickelson had just gotten to the tee when the horn blew again. Fans were sent home before a severe thunderstorm drenched the course, filling bunkers, fairways and cart paths with water.

Finally, play for the day was suspended just before 5 p.m. Players are due back at 7 a.m. so they can make the cut for the third round.

Love was glad to be done before the weather moved in even at 5 under, and he doubts Crane will run out to 24 under. This course where John Cook won at 26 under in 1996 was redesigned to a par of 70 after 2004.

“So he’s off to a great start and we’ll have to run him down,” Love said about Crane. “He’s a great putter, and these greens are perfect, so he’s got the advantage on us right now, but just hang in there.”

Crane had perfect timing for most of his rounds. He played most of the first round after the lengthy delay Thursday afternoon, which left nearly perfect scoring conditions with little wind and soft greens. He was in the first group off No. 1 starting the second round, and he birdied rolling in a putt with a break of more than 4 feet for the first of 24 putts.

But Crane hit into a bunker on No. 18 and missed a 7-footer to save par on way to his first bogey in two rounds.

“How do I keep this going?” Well, certainly just keep doing what I’m doing, and hopefully the same game shows up, and obviously continuing to putt well helps your score,” Crane said. “I think that’s the key.

This was the second straight round where fans were sent home early due to weather. Memphis hadn’t had a weather delay since 2010 when the first round was suspended due to lightning. This is the 16th tour event this season with either a delay or suspension due to weather or darkness.

David Hearn leads the Canadians in the field. He’s 2-under after one hole of his second round.