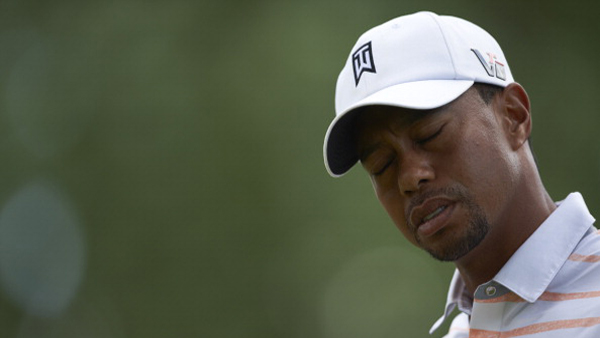 AKRON, Ohio – Tiger Woods was at Firestone, and the scene looked all too familiar.

Except he wasn’t hoisting a trophy.

He could barely bend over to pick up his tee.

Right when Woods thought he was making small progress toward his return from back surgery, he suffered a scary setback Sunday when he was stricken with more back pain and withdrew after eight holes from the Bridgestone Invitational.

How bad was it? Woods headed home to Florida to find out if he could play the PGA Championship this week.

But as he stood next to his car, he struggled to even take off his golf shoes before his caddie drove him away into an uncertain future.

The lasting images of Woods at Firestone were not of him winning, like he did last year for the eighth time. They were of Woods wincing, hobbling and twitching. Those were the scenes from earlier this year when he coped with recurring back pain that forced him to withdraw from the Honda Classic and eventually led to back surgery March 31.

In his third tournament since returning from surgery, this had the look of a serious setback.

Woods injured himself playing a shot from edge of a bunker on the par-5 second hole. With all weight on his right leg, he took an awkward slash at the ball, fell back toward the sand and landed with a thud, and kept jogging out of the bunker from sheer momentum of the steep drop.

“I just jarred it, and it’s been spasming ever since,” Woods told a PGA Tour official before leaving.

Woods kept playing, hitting a number of shockingly bad shots. He hit one into the water from the fairway on No. 3, coming up some 30 yards short of the flag. And on the par-3 fifth hole, his tee shot was 65 yards short of the hole. From a bunker left of the seventh green, he blasted out and back into the fairway and made double bogey.

He grimaced at impact when he hit a 315-yard drive into the left rough on No. 9. Woods slowly stooped over with his right hand on his leg, reached toward his back and slowly bent down to remove the tee from the ground. Moments later, he stepped into a cart and headed for the parking lot.

“It’s just the whole lower back,” Woods said. “I don’t know what happened.”

Masters champion Bubba Watson said he didn’t see Woods hit the shot that hurt him on No. 2, though he could tell as the round went on that something wasn’t right.

“He hit some shots that we’re not used to seeing Tiger hit, even when he’s coming back from an injury like this,” Watson said. “So obviously, something was bothering him. … Like I told him when I shook his hand, I said, `I’m praying for you. Hope everything turns out good. Hope to see you next week.'”

With the pain he showed leaving the course – and just four months removed from back surgery – it would seem unlikely that Woods plays next week at Valhalla, where he won the PGA Championship in 2000. Woods is scheduled to play the opening two rounds with Phil Mickelson and Padraig Harrington.

Mickelson was on the 11th hole – not far away from No. 9 – when he noticed Woods leaving.

“It didn’t look good. It looked like he was really in pain,” Mickelson said. “I hope he’s OK. I hope he’s able to play next week. I hope it’s a muscle and nothing serious because I’m really looking forward to playing with him. We rarely get paired together. If we do, it’s been early Saturday.

“As much as I love playing with him, playing against him, trying to beat him, we all want him in the field. We all want him back. I just hope he’s OK.”

If Woods does not play in the PGA Championship, that would be the end of his season. He would have to win the PGA to be eligible for the FedEx Cup playoffs. In six starts on the PGA Tour this year, Woods finished all four rounds only twice.

Woods had back surgery to alleviate an impinged nerve, forcing him to miss the Masters for the first time and the U.S. Open. He returned after three months to Congressional – three weeks ahead of his own schedule – and reported no pain in missing the cut by four shots at the Quicken Loans National. He also reported no pain in four rounds at the British Open. He finished 69th, 23 shots out of the lead, his worst 72-hole result in a major.

And now with another injury, Ryder Cup captain Tom Watson might have an even more difficult time picking him for the American team. The captain has said he wants Woods on the team if he was healthy and playing well.

Woods was doing neither.