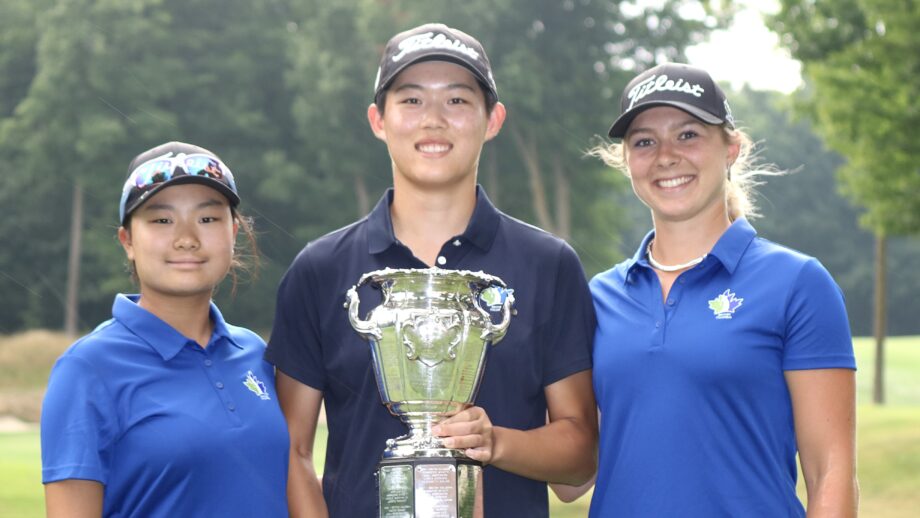 KITCHENER, Ont. – Team Québec and Team British Columbia were neck-and-neck coming down the stretch, but it was the latter who escaped victorious in the interprovincial team competition at the 108th Canadian Women’s Amateur Championship, presented by BDO.

With half a hole remaining, Mother Nature decided to make her presence known by way of lightning and thunder, forcing officials to suspend play. After a short delay, the final group of Leah John (B.C.), Céleste Dao (Québec), and Erin Kim (Ontario), returned to hole their final putts and officially put a stamp on the interprovincial team championship.

B.C. entered the day one stroke up on Québec and the lead barely budged for most of the round, but in crunch time it was the team from Canada’s west coast – composed of Yan Jun (Victoria) Liu, Leah John and Ha Young Chan – who prevailed, winning by five strokes to capture the Interprovincial Team Trophy.

Vancouver’s Liu and John captained the ship for B.C., firing rounds of 73 and 75, respectively, in Wednesday’s second round to secure the 36-hole team championship title. Individually, Liu ranks T3, while John is positioned T5 heading into day three.

The player they are chasing is Katherine Muzi – the highest ranked competitor in the field on the World Amateur Golf Rankings. Muzi, 22, waited, and waited and waited to make her move but when she did, there was no stopping the American. After an opening round two-over par 74, the Newport Beach, Calif., native carded a four-under par 69 to vault atop the leaderboard through two rounds.

Muzi, who started her day on No. 10, birdied hole No. 5 to spark a four-hole birdie streak and a back nine rally that helped her leapfrog the field ahead. The University of South Carolina Trojan sits at three-under par for the tournament and owns a one-shot advantage halfway through the national championship.

Alissa Xu had a day of her own, firing a three-under par 70 on a wind-howling afternoon at Westmount Golf & Country Club. The Richmond Hill, Ont., native withstood gusts of up to 60km/h and climbed 13 spots up the leaderboard into sole possession of second place.

“I really just tried to just focus on the process and not the score because I find that distracting at times,” said Xu. “Just [wanted] to pick the right clubs and pick the right targets to shoot at.”

That she did. The 16-year-old poured in five birdies to join the leaders on the front page of the leaderboard. She says her goal is to simply stay level-headed entering the final rounds and focus only on what she can control.

Rebecca Kim made one of the biggest splashes in round two, jumping 23 spots on the leaderboard and into the top-10 with a one-under par 72 on a day where birdies came few and far between.

“I was able to handle the wind well today; it was definitely really gusty, so I think that was definitely something that was to my advantage,” said the Victoria, B.C., native. “I was a lot cleaner with my approach shots [today]. I gave myself more looks; I was just kind of tighter to the pins and I got more stuff up-and-down,” she added.

Kim says she focuses on staying resilient through the adversity and that playing ‘gritty’ will be the payoff to success the rest of the way.

First round leader, Leigh Chien, struggled on day two, shooting a six-over par 79. The American remains in a tie for third place, however, and very much in contention with 36 holes left to play.

With the cutline set at 13-over, 73 players advanced to the ‘weekend’ in Kitchener. The third round is scheduled to begin at 7:30 a.m. on Thursday morning. The leaders will tee off in the final group at 9:30 a.m.