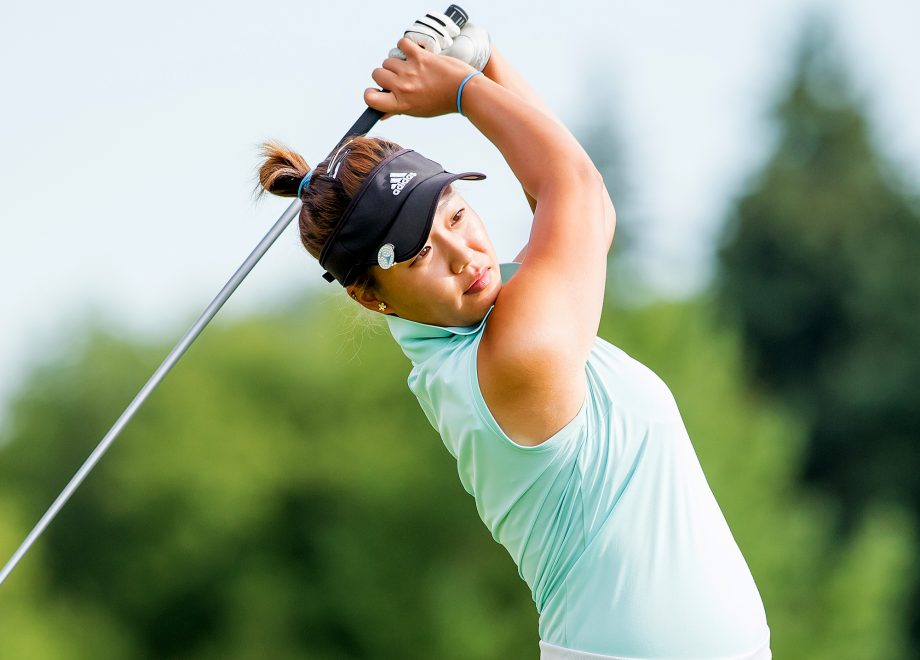 RANCHO MIRAGE, Calif. – August Kim of Saint Augustine, Fla., took lessons at LPGA International, home of Final Stage of LPGA Qualifying Tournament, when she was a teenager and now she is hoping to advance that far and one day play on the LPGA Tour. She took a step in the right direction on Thursday at Stage I of LPGA Qualifying Tournament with a 6-under, 66 on the Arnold Palmer Course at Mission Hills to share the first-round lead with Kristina Merkle, who also posted a 66 on the Arnold Palmer Course.

Kim, who won the Big Ten Championship this year at Purdue, made six birdies on the day, but didn’t really heat up until the back nine.

“I hit the ball really well, it was a steady day,” said 21-year-old Kim, who is one of 93 amateurs in the field. “It was the kind of first day that you want at a tournament like this.”

The rising senior at Purdue holed out for eagle on the 13th hole from 140 years with a 9-iron.

“That really gave me a jolt of energy,” said Kim. “After that, I made two birdies and then also closed with a birdie.”

Kim says that she plans to play all three stages of LPGA Qualifying Tournament with the hope of earning some status to pursue her professional career once she graduates in May of 2017.

“My intention is to finish my eligibility and I’m adament about that,” said Kim. “Purdue has given so much to me and I want to give everything I have back to the school. That is the plan right now and the biggest goal at Q-School is to get some status.”

Kim is a biochemistry major at Purdue and although she doesn’t plan on going to medical school, her career choice if golf wasn’t in the equation would be to practice medicine.

Kim learned the game of golf from her father, Christopher, who is on the bag this week in Rancho Mirage.

“He was a big golfer and he taught me the game so it is great to have him caddy for me this week,” said Kim. “I have a comfort level with him on the bag and I hope to keep things rolling during the weekend.”

Kim took lessons at LPGA International with Craig Shankland from the time she was 13 through 16.

In mid-July Kim took medalist honors at Pinehurst No. 2 in the stroke play portion of the North & South Women’s Amateur.

Kristina Merkle (Honolulu, Hawaii) has struggled in her first full season on the Symetra Tour. She has made eight starts and has missed the cut in each. Merkle erased some of the demons a tough year brings by firing a 66 in round one of LPGA Qualifying Tournament.

“It went really well today,” said Merkle, who played the Palmer Course. “I haven’t had a round like this in a long time so it is nice to get this under my belt.”

Merkle’s swing has undergone some changes over the last month under the watch of her dad, Lou, who is her longtime coach and a new instructor Mike Doctor out of New York.

“The changes are still new, but everything is kind of clicking right now,” said Merkle. “I’m definitely starting to get my confidence back.”

Merkle graduated from Tulsa in May of 2014 and played in a pair of Symetra Tour events in 2015. It is her dad’s message that really has her believing,

“He always tells me that there are girls that go three or four years without winning tournaments and then all of a sudden, something clicks,” said Merkle. “Golf is a funny sport. It throws you lots of curve balls and sometimes you swing and miss. My dad has really helped me continue to believe.”

Merkle was the Conference USA Golfer of the Year in 2012.

She hopes to one day play on the LPGA and then open a school in Hawaii to help young kids with academics and athletics.

“Ever since 8th grade, my parents and I have talked about a foundation,” said Merkle. “I never looked at academics as a priority until college and I want to have a school where kids can go for help in both academics and athletics. The game of golf has allowed me to travel the world and I really want to give back one day.”

Former Team Canada member Taylor Kim of Surrey, B.C., put together a six-birdie day to move into a share of third at 5-under. Toronto’s Anna Kim shot 70 on the day to sit T20, while Maya Parsons of Whitby, Ont., and Surrey resident Aram Choi follow one stroke behind in a tie for 36th. Team Canada National Team member Josée Doyon of St-Georges-de-Beauce, Que., carded a first-round 75.