Australia’s Murdaca on top at Asia-Pacific 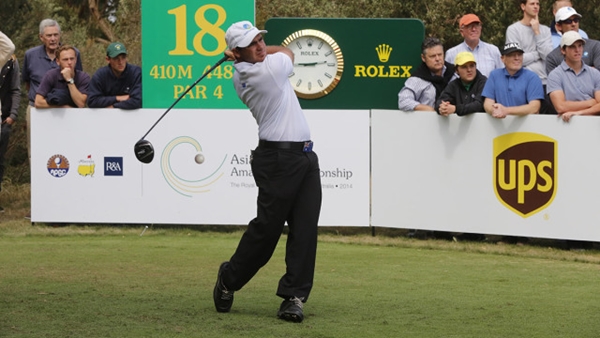 MELBOURNE, Australia – Antonio Murdaca shot a 5-under 67 on Saturday to open a commanding 8-shot lead heading into the final round of the Asia-Pacific Amateur Golf Championship.

The 19-year-old Australian took a 1-shot lead into the third round after shooting 69 and 68 as the only player in the tournament to break 70 in the first two rounds. He hit every fairway Saturday on the way to the day’s low score over the 6,453-metre (7,059-yard) Royal Melbourne Golf Club layout.

Cheng Jin of China is in second place at four-under with Australia’s Todd Sinnott with and Pan Cheng-tsung of Taiwan. Horikawa Mikumu of Japan matched Murdaca’s 67 to move into a share of third place at 3-under.

Murdaca’s round was blemished only by a bogey at the par-4 11th. He had four birdies before and an eagle at the par-5 17th.

“I was feeling good. I went out today and just tried to do what I did yesterday … hit one shot at a time, just try to hit some solid shots,” he said. “I pulled that off so I’m happy with my round today.”

Murdaca is now poised to become the first Australian to win the Asia-Pacific tournament and, as this year’s winner, an invitation spot at next year’s U.S. Masters and an exemption into the final stage of qualifying for the British Open.

Pan shot a 1-under 71 Saturday, with four birdies and three bogeys, while Cheng had an even-par 72 and Sinnott a 2-over 74 after three bogeys on his outward nine.

Murdaca played what may have been the shot of the tournament when his 220-meter (yard) approach to the 17th nudged the lip of the hole and almost dropped for an albatross.

“I just hit a little fade 4-iron,” he said. “It hit the target. I didn’t quite catch it and hit it a little bit short but it released nicely and it gave me a good chance for eagle there.”