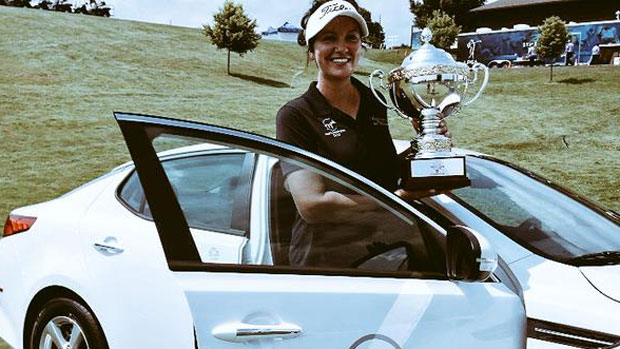 “My new Kia, this is amazing,” said Elliott, sporting green hair and a nose ring. “I’ve been driving a rental all year and this car is definitely the cherry on top.”

“This is so sweet, I am so stocked and this is just unbelievable,” Elliott said. “I’m so happy right now, this is what I have been working for and this is huge for me. This is the first step in the right direction. This is for my family back home. I know they are going to be celebrating tonight.”

Elliott birdied the par-3 16th and closed with two pars.

“I felt really calm and I am normally a pretty relaxed person, but I thought when I was put into the moment that the nerves would creep in, but I felt this unbelievable calm,” Elliott said. “It was nice to hit a great shot on the last hole and then roll a good putt up there. Waiting to tap in the putt was just agony, but I am super pleased.”

France’s Fiona Puyo and Canada’s Augusta James tied for second. Puyo had a 65, and James shot 69.

Casey Grice, Lindy Duncan and Canada’s Sue Kim followed at 10 under. Grice and Duncan shot 67, and Kim had a 70.

Brooke Henderson finished T9 after a final round 1-under 70.